Gridiron 2014: How the shots were made 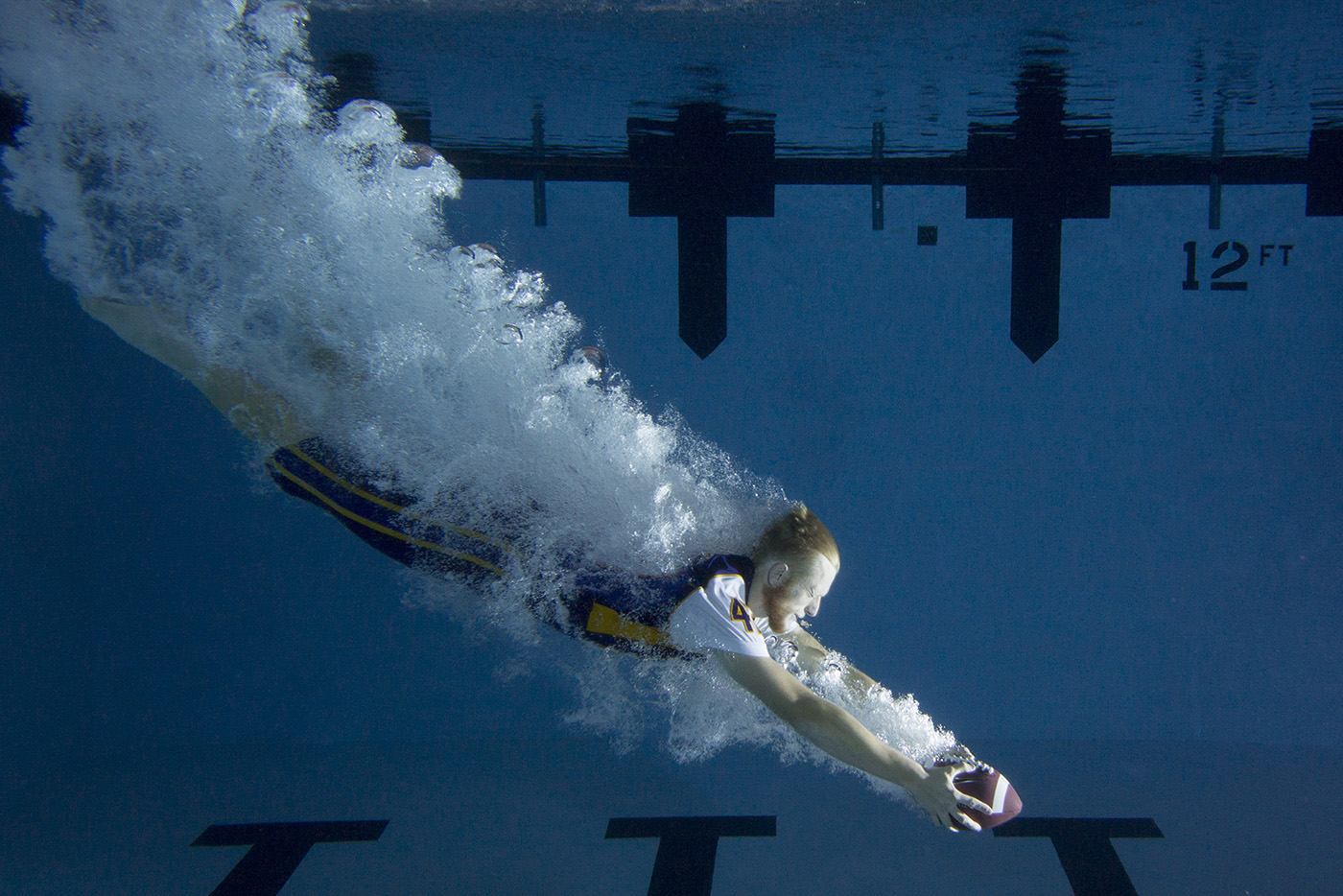 High school football season is upon us once again. While that means we get busier on Friday nights, it also means that another Rockford Register Star Gridiron season preview section is in the books. Last year, we played with fire and light. This year, we took things to new depths (pardon the pun).

Since the beginning of 2014, the photo staff and sports staff has been collaborating on what to do for this year’s Gridiron section. We had an excellent idea. Unfortunately, some unforeseen hurdles made us put that idea on the back burner. And yes, I’m keeping that idea secret for now because there’s always next year!

We were sent scrambling at the beginning of August to come up with a completely new idea and only left with a few weeks to execute it. I’m not going to lie. There was discussion of doing something simple and easy this year. But it didn’t take long for us to decide that wasn’t an option. I suggested shooting the whole thing underwater. My sports editor ask why underwater. My answer? “Because it would be cool.” That’s it.

People walk around in life seeing things from their own perspective. For most, that’s at eye level all of the time. Photographers often kneel down or climb up on things to change the way something mundane is seen. Football underwater seemed pretty different to me. It also would give us an opportunity to work a little differently as we can move differently in water than we can on land.

Planning for an underwater shoot was not easy. Mainly because I’ve never shot underwater before. My co-worker, Brent Lewis and I first sat down and brainstormed a shot list. We had to get shots of ten teams plus a cover shot. We didn’t know how many players might be uncomfortable in the water, so we wanted a lot of backup ideas.

I knew we might have difficulty moving a football underwater. I bought one and used an air inflation needle stuck in the end of a garden hose to completely fill the ball with water. This gave it a more neutral buoyancy. It still floated, but it moved through the water with complete ease.

The next thing we had to find was an underwater camera. We looked into renting them but they were a bit above our budget. Luckily, a good friend, Tim Storm, offered to share his Nikon AW 1.

With this being a camera none of us (Tim included) had ever used, we wanted to test it out before we got to the shoot day. We picked a night when we were all available and headed to Tim’s pool. We played around for probably a good six fun and frustrating hours. The biggest issue we ran into was lighting. The camera has a very small pop-up flash. However, when fired straight, the light bounces off all the particles in the water. We knew we were going to need additional lighting.

I came prepared with a bunch of different flashes. We used some old beater Sunpak flash units and outfitted them with optical slaves on the flash foot. Those were then put in bags and vacuum sealed. We took those in the pool and continued testing. I tried using my hand as a bounce card in front of the pop-up flash so it would only serve as a trigger for the off-camera flash(es). It worked! We had directional lighting underwater!

This camera had some limitations. We didn’t have a great range for shutter speed or aperture settings. That made it a little harder to control ambient light. Also, the camera functions more like a point and shoot camera than a DSLR. There is definitely lag between the moment you push the shutter button and the time the camera actually takes the picture.

We felt like we had worked out most of the issues and were feeling as confidant as we could.

Come shoot day, we go to Harlem High School’s pool and start prepping our gear. The plan was that Brent and I were going to split the images, each of us shooting five players. When we weren’t shooting, we were going to be helping with lighting. Tim also helped with lighting all day.

The first player was from Harlem. He also happened to be on the school’s swim team.

We got in the pool and tried to take a couple shots and guess what happened? None of the auxillary lights were firing. As it turns out, my hand bounce isn’t the most reliable thing in the world. I got it to fire twice, one of the frames being the one above. I wasn’t in love with it but we were on a tight schedule. We only had 30 minute with each player. We had to use it. We managed to get the lights to cooperate between shoots. When in doubt, put fresh batteries in everything.

My next shot was of the quarterback from East. I decided to have him screaming underwater. I bounced the flash off my hand to trigger a main flash on the right. That flash then triggered a flash a bit off in the background on the left. I was happy with the frame, but not 100%. But again, I didn’t have time to keep working it.

We switched off and Brent shot a few of the players and I played with the lights for a while. Then we had a larger window between players to grab a bite to eat. During that time, we concluded that using a hand for a bounce was not working great. We used some gaffers tape and the chrome inside of a granola bar wrapper to fashion a directional reflector in front of the flash so we could keep our hands where we needed them.

When I got back to shooting, I was photographing Belvidere North’s player. We needed to do two shots with him as our editor suggested using him for the cover. The first shot I did had him running along the wall of the pool throwing out a stiff arm.

The second shot that was used for the cover had him splashing into the water off of the diving board.

I had been waiting all day to try a shot of a player diving in with a trail of bubbles behind him. When the player from Hononegah showed up, I asked him how comfortable he was in the water. Before he could respond, his parents said he was like a fish. Perfect. It was time to try it.

This turned out to be a tricky shot. I had to be deep in the water and a bit farther away from the subject. I used a fanny pack loaded with 20 pounds of dumbbells (I had used this on some of the previous shots as well) to hold me to the bottom of the pool. Since everything was happening at greater distances, the pop-up flash had to trigger one of the Sunpak flashes next to me which was simply used to trigger another flash much farther out in the pool.

I wanted it to look like the player was diving toward the light. Tim was able to dive to the bottom of the pool and hold the flash in the perfect spot to light the player.

It took a few tries but it turned out great.

We had to reschedule a few of the shots for other days. One was for Jefferson’s player. I decided to go for an underwater reflection. We were having difficulties with the lights again but we made it work.

The last one was Belvidere. We wanted the quarterback floating face down in the pool while I laid on the bottom looking straight up. This was more difficult than anticipated because I needed to use the weight belt in the deep end. It’s a little nerve racking when you try and stand up and you still have a ways to go to for a breath.

Since this was a rather technical shoot, we decided to put together a how to video for those that would be inclined to watch.

Brent and I spent quite a bit of time working on these portraits and we’re proud of the images we were able to make. You can see the full take including Brent’s images on the Rockford Register Star’s website.