Gridiron Preview 2013: How the shots were made

August was a busy month for photographers at the Rockford Register Star. We were brainstorming and shooting our annual Gridiron preview section. This special section releases on the day of the first high school game each season.

Each team in the NIC-10 conference has a page featuring a portrait, a story and other related information. Each year has a theme. Two years ago, the portraits mimicked famous album covers. The layout was reminiscent of the Billboard Top 100 chart. Last year, the theme was Hometown Heros and all the portraits were taken at local landmarks.

This year, an early thought for the theme was “Works of Art,” saying that every great play was a work of art. The idea of mimicking works of art was the idea. We worried that the shots may not resonate the way they were intended. Instead, we suggested making the photos themselves works of art.

Ideas began to flow and they each had one thing in common. Light. I know that may sound cheesy, especially because all photography is just recording light. However, all of our ideas involved different forms of light and different photography lighting techniques.

That’s when we realized the theme: “Friday Night Lights.”

Many of our ideas were ambitious. We needed ten creative portraits. We tossed out things we had never done before and figured out how to make them work.

The first portrait I shot was of the quarterback at Belvidere North High School, Jace Bankord. I wanted to show that his throwing was on fire. So, I lit the ball on fire.

Before I continue, let me reiterate that many safety precautions were taken to ensure nobody was injured in the making of this shot. I don’t advocate trying to create a similar shot without taking significant safety precautions.

This was shot indoors in an large room with concrete floors. A black seemless backdrop was placed at a reasonable distance behind Jace.

The fire part is easy. There are many flammable substances. I chose rubber cement. Once applied, it stays in place. Once set on fire, it burns for only a few seconds.

I wanted Jace holding the flaming football. I wanted to control where the flames were so they had the most impact toward the camera and were safely out of the way of Jace’s hands. I taped a folded up strip of aluminum foil to the backside of the ball. That served as a small shelf to place the rubber cement.

The shape of the flames are completely unpredictable. That meant I had to take a bunch of shots to get one I really liked. I had the help of my coworker, Amy J. Correnti. She applied the rubber cement and lit it on fire so I could be at my camera, ready to shoot as soon as the flames spiked up.

The flames alone wouldn’t be enough to light the picture. I used two Canon speedlights as well. One was behind and over the left shoulder of Jace. It had a Gary Fong PowerSnoot to help control the direction and spill of the light. To Jace’s right, I had my DIY beauty dish gelled orange to help cast a warm light, similar to what a flame would throw. 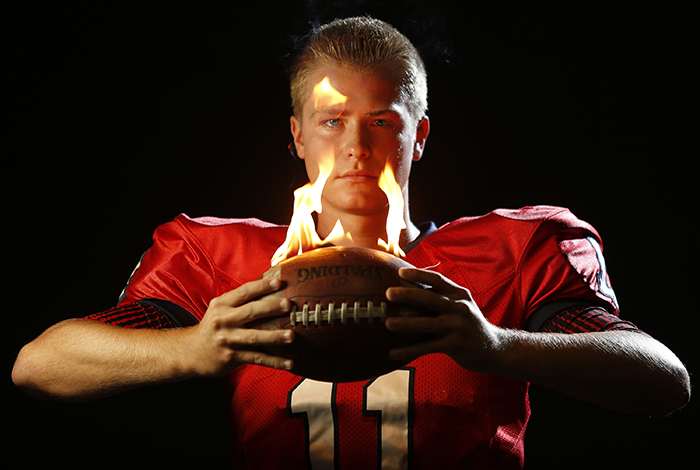 We wanted to shoot a handful of these portraits on a football field. After finding a school that would allow us evening access to their turf and turn the stadium lights on, we lined up four portraits back to back. I shot two of them, with my first being of Auburn High School’s Cleveland Redd.

This shot was much more straight forward. Cleveland is a wide receiver. I wanted a shot of Cleveland diving to catch the ball. I was optimistic that there would still be a little color in the sky. I also wanted the stadium lights in frame.

I set up two speedlights on the field aimed where Cleveland would be diving. One in front and one behind.

Once my lights were dialed it, I then had Amy start tossing the football into the scene and Cleveland was diving for it. I kid you not that the first frame in the shoot was the one I ended up using. I took a bunch more but kept coming back to the first one. I couldn’t surpass it so I quit trying. 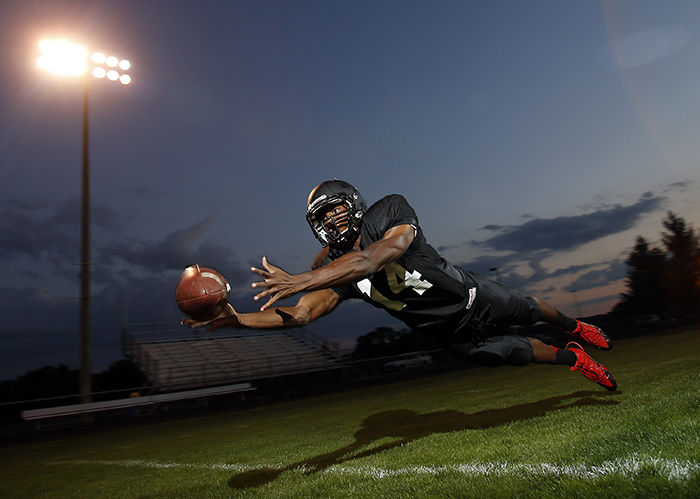 The portrait of Guilford quarterback Nino Musso was one of the more abstract ideas we had. The idea was to light paint a play on the field around him.

Light painting is exactly what it sounds like. The shutter on the camera is left open and a light source is used to illuminate different portions of the frame for different durations. In this case, I used a small LED flashlight pointed back at the camera.

I wanted a high vantage point. I borrowed an eight-foot ladder from our sports editor and clamped a tripod on top of that. I worked to get the exposure time right. I needed the stadium lights turned off so I had maximum control. We ended up turning the nearby stadium lights off but leaving the ones at the other end of the field on.

The problem with light painting is that you can’t see where you painted until you review the image. I didn’t want my X’s and O’s to overlap. I tried, tried and tried again. It got a little better each time. I wanted to shoot one more frame when the field sprinklers came on.

With my camera mounted to a tripod which was in turn mounted to a ladder, I told everyone to hold still. We let the slow moving sprinklers soak us. After they passed, I took one more frame and called it quits. 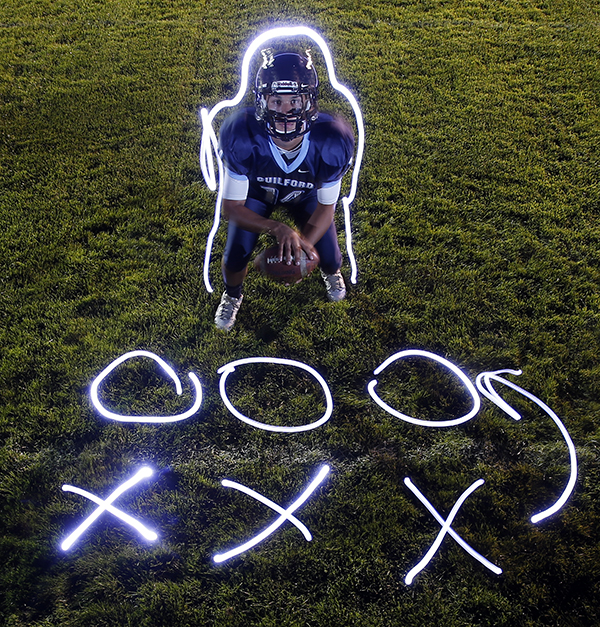 The Jefferson High School portrait of Tremayne Richardson was my other fire shot. Actually, it was more of a sparks shot. Again, many safety precautions were taken in the making of this image. I do not suggest trying to replicate this technique without sufficient safety precautions.

I wanted to shoot the Jefferson player underneath the Jefferson street bridge but the street lights would have illuminated too much in the frame. Instead, I photographed him in a parking lot.

I had Tremayne stand with the ball as if he was going to smash it into the camera. I lit him with a single speedlight.

I once again had Amy’s assistance in triggering the exposure. I was standing behind Tremayne with a metal whisk attached to a steel cable. Inside the whisk was a piece of steel wool. When lit on fire and spun, steel wool throws sparks. I spun the whisk by holding the cable and sparks flew everywhere. The long exposure showed the path of the flying sparks. The pop of the flash at the end of the exposure ensured that he was in focus. 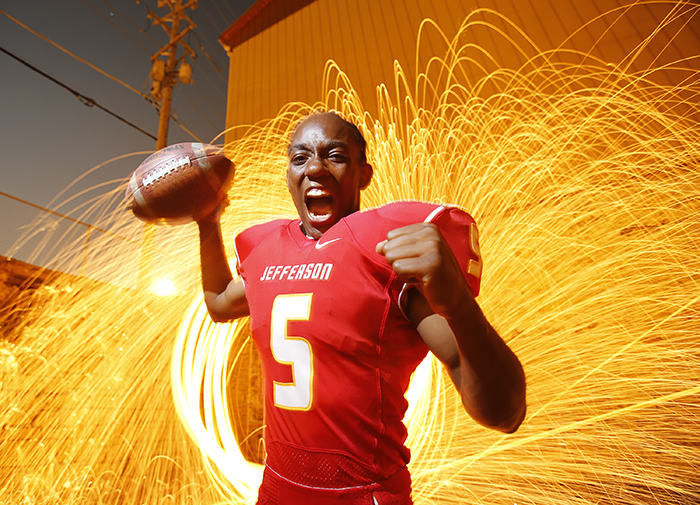 My fifth portrait was of Belvidere’s Maurice Jackson. I decided to shoot this in the same studio space that I photographed the Jace Bankord, the quarterback from Belvidere North with the flaming football.

I wanted to shoot a single exposure with multiple images recorded on the frame. I wanted it to show fluid action and motion so I decided to set up a shot using stroboscopic lighting, aka repeating flash.

To make the scene large enough for this shot to work, I expanded my backdrop to twice the width. At first, I had nothing on the floor. I was then reminded that I have a large piece of astroturf that would make an excellent addition to the frame.

Once the stage was set, the testing began. I needed to light Maurice as he moved from the left side to the right side of my frame. Because of the repeating and rapid firing of the flash units, you have to keep the power output relatively low.

It becomes a balancing act. Some areas needed extra light so I had multiple lights overlap. Others need less so I used black paper to flag off the lights to prevent spill.

When all was said and done, I had four lights overhead, one on a stand on either side, and a seventh light on my camera triggering the rest. Each light fired eight times – once every half second – for four seconds.

It took probably a solid three hours to set up and test the shot.

Once Maurice arrived, we just started shooting. After a bunch of frames, we had more than enough keepers to choose from. 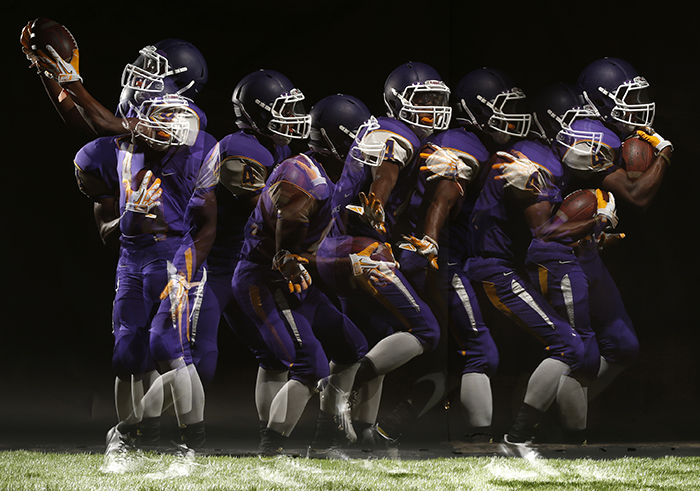 Belvidere half back and defensive back Maurice Jackson, 17, Wednesday, Aug. 21, 2013, in Rockford. MAX GERSH/ROCKFORD REGISTER STAR ©2013

Amy had already shot a portrait of Boylan’s quarterback. We wanted a generic shot to represent Friday Night Lights. I was immediately reminded of an Instagram shot I took at Boylan’s stadium during a soccer game a year before.

Instagram shot of a spectator watching the Harlem vs Boylan jv soccer.

I wanted to replicate the shot with a football player looking out onto the field.

This was a simple shot. I just had to wait for the light to be right. I met up with a player at Boylan’s stadium and got him into place as the sun was setting. I laid down on to get as low of an angle as possible to eliminate the trees from the opening in the stands. It was as easy as that. 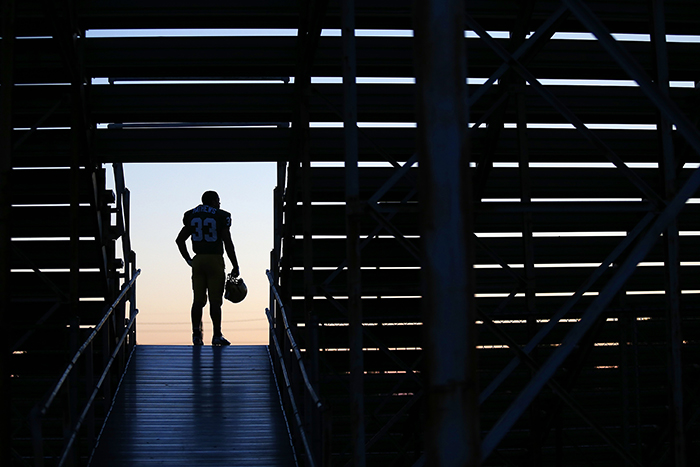 Amy and I were proud of the work we produced. We put a lot of time into the shots. All of the shots including the five Amy took can be seen on the Rockford Register Star’s web gallery.