I’ve been part of many creative sports portrait shoots. My football portraiture pushed boundaries and set new standards and expectations for my paper.

Shortly after moving to Florida and starting my career with The Villages Daily Sun, I was asked to do an over-the-top portrait shoot for our local high school basketball teams. The photo team worked with the sports department and our executive editor to brainstorm the theme. It didn’t take long for us to land on the theme: The Wrecking Crew.

As with everything in newspaper world, we’re on a deadline. I took some time to scout locations and props for the shoot. After a few days of driving around, I settled on the final four.

When picking these locations, I had to guess a little bit on what the scene would look like at night. You see, for these location shoots to work, I need the sun to be way down in the sky. It’s really hard to compete with the Florida sun. I have access to Alien Bees and Nikon Speedlights. There is only so much power output.

On top of making sure I have the right setting with the right equipment, I needed to make sure I had access. Our press plant was no issue. But I needed after-hours access to the school and to private businesses. I was very fortunate to be met with community members that were more than happy to work with us.

As for props, I started looking for big tools. Things that looked tough but wouldn’t necessarily misconstrued as weapons. I settled on a jackhammer, a sledge hammer, a large pipe wrench and huge bolt cutters.

I rented what I could. Unfortunately that was only the jackhammer. It was a pretty funny conversation at Home Depot’s tool rental department. They were trying to make sure I got the right jackhammer for the job. I said I wanted the blue one because it would better match my shoot. They shook their head, took my money and sent me on my way.

I found the best deals on the rest of the tools that I could between the local hardware stores. I also got a length of some heavy chain for the shot with the bolt cutters.

We didn’t want these tools to look brand new. They needed to look weathered. The jackhammer already looked the part. As for the rest, it was a pretty easy and fun task. We laid the tools down in gravel and sand and began beating them with the other tools! Talk about a hilarious stress reliever!

Now that we had everything planned, it was time to shoot. That being said, we could only really shoot one a day. We didn’t want to take up too much time from these private businesses. Since we were already keeping them after hours, we didn’t want to jump from one location to another with these kids. On top of that, we started shooting these the week on Thanksgiving. They published on Friday but had to be done by Wednesday so they could be placed on the page in advance. We shot Saturday, Sunday, Monday and Tuesday. There was no room for error.

The first shoot was with Wildwood High School’s Kari Niblack. She was wielding the jackhammer on a pile of jagged rocks. We wanted a dusty scene as if she had been crushing rocks all day. We used cans of Atmosphere, an aerosol fog spray. With a backlight and friendly winds, we got the look we were going for. 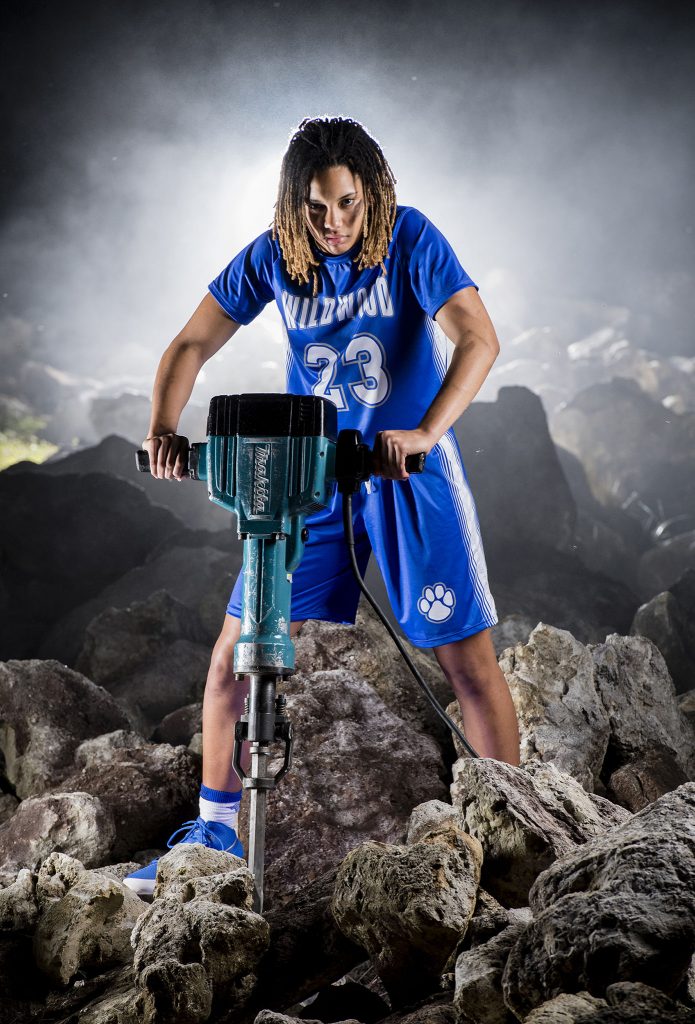 While the shoot took some time, we went as quickly as we could because the mosquitos were eating us alive. They were so big, they actually made the final frame. You can see one just off her left hip.

By the time we wrapped up the shoot and packed up all our gear, it was probably around 8 or 9 p.m. And instead of shooting the next photo in the evening, we had to shoot it before sunrise. So we rushed home and got as much sleep as we could before getting to the scene at 4 a.m. to get prepped.

This was the frame we shot at our plant. We wanted a demolished wall in the frame. I had already picked up 30 cinder blocks and moved them to the location a few days earlier. So when we got there, we staged the blocks and broke them as we needed to.

Side note: While a Subaru Forester can fit 30 cinder blocks, the suspension does not like it. 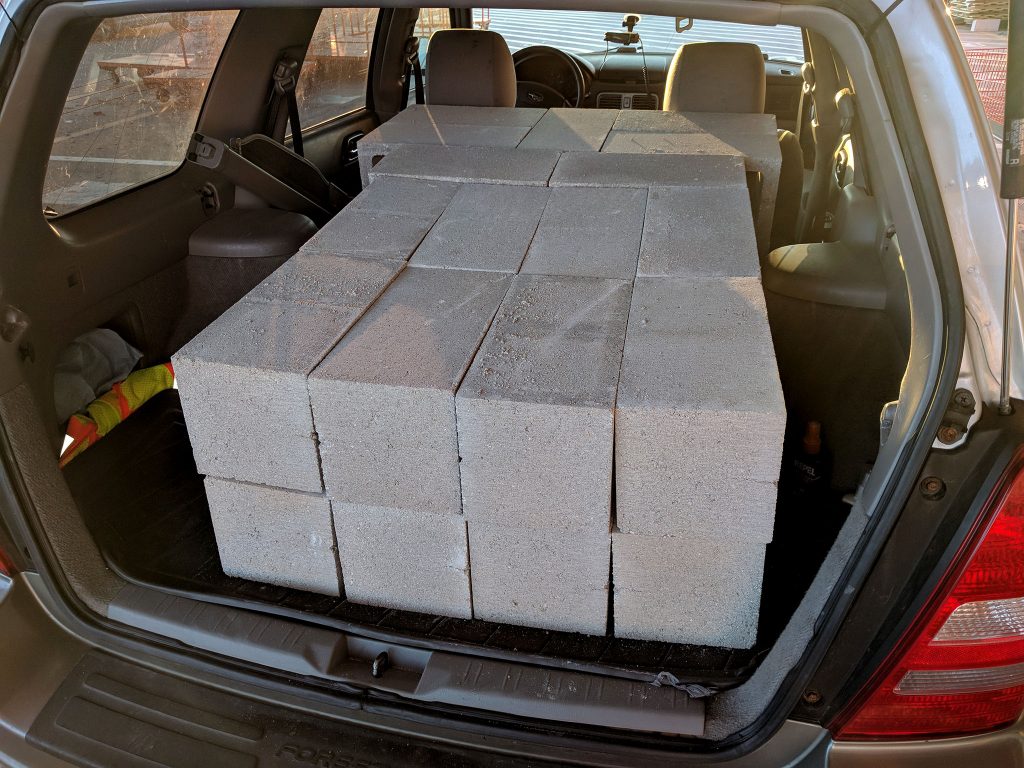 Cinder blocks in the back of my Subaru Forester. ©2017

We were racing the rising sun so as soon as The Villages High School’s Tre Mann got there, we started shooting. We used the old rubber cement trick to get some fire on the end of the sledge hammer. We also used a little more of the Atmosphere spray to give the fog look behind the bricks. 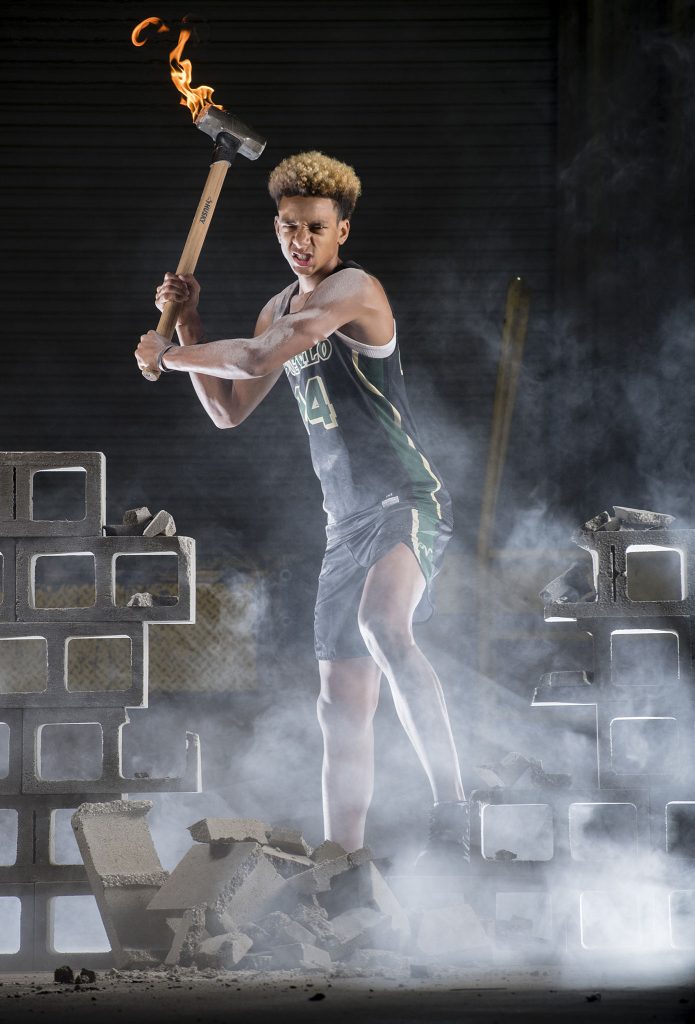 The next night, we tackled Wildwood’s Darion Wilson. This one was under the bleachers at the high school. His was a bit tricky. We were shooting it as a 10 second exposure with a flash at the end. We were using steel wool to throw sparks during the exposure. Some had too many sparks. Some had too few. Some were totally obscuring his face. And after each shot, we had to totally reset the steel wool. There was no burst shooting of any kind for this one. It was without a doubt the most frustrating and difficult to get. 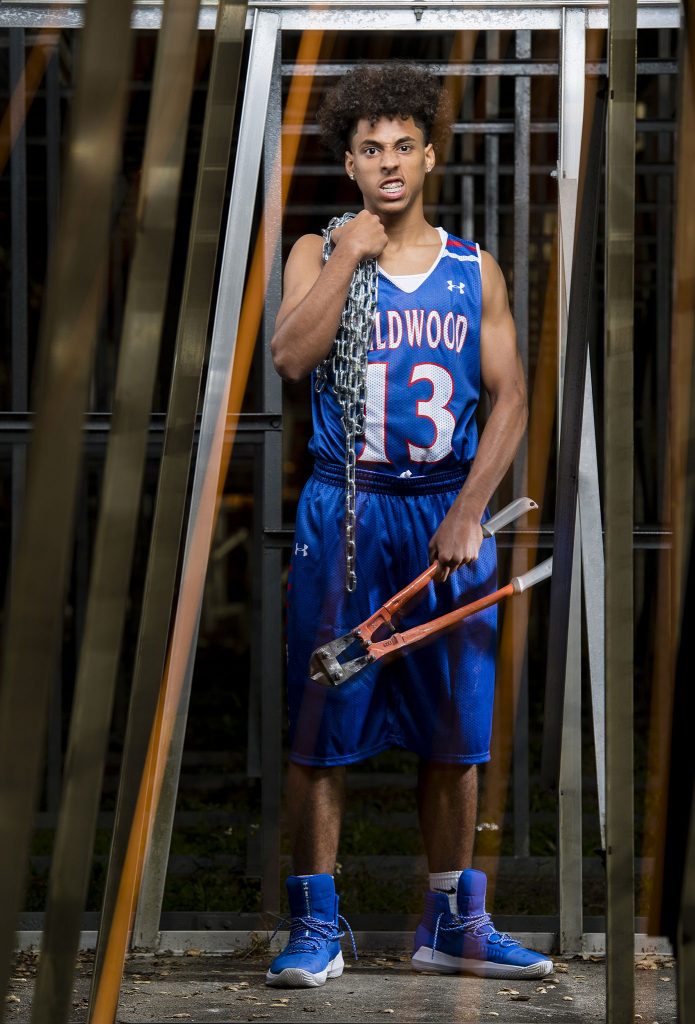 Lastly we photographed The Villages High School’s Nikki Hall at a salvage yard. Earlier in the week, the owner of the salvage yard drove me around his lot while I was standing on a side platform of his tractor. I found a perfect car with a completely empty engine bay. I knew that I wanted Nikki in that engine bay.

I placed one light farther back in the field of wrecked cars so I would pick of highlights of the cars in the background without totally lighting them. I also placed a Speedlight in the engine bay to light up the Atmosphere fog we sprayed in.

We shot as fast as we could. The wrench was pretty heavy and it was wearing on Nikki. But she nailed it. 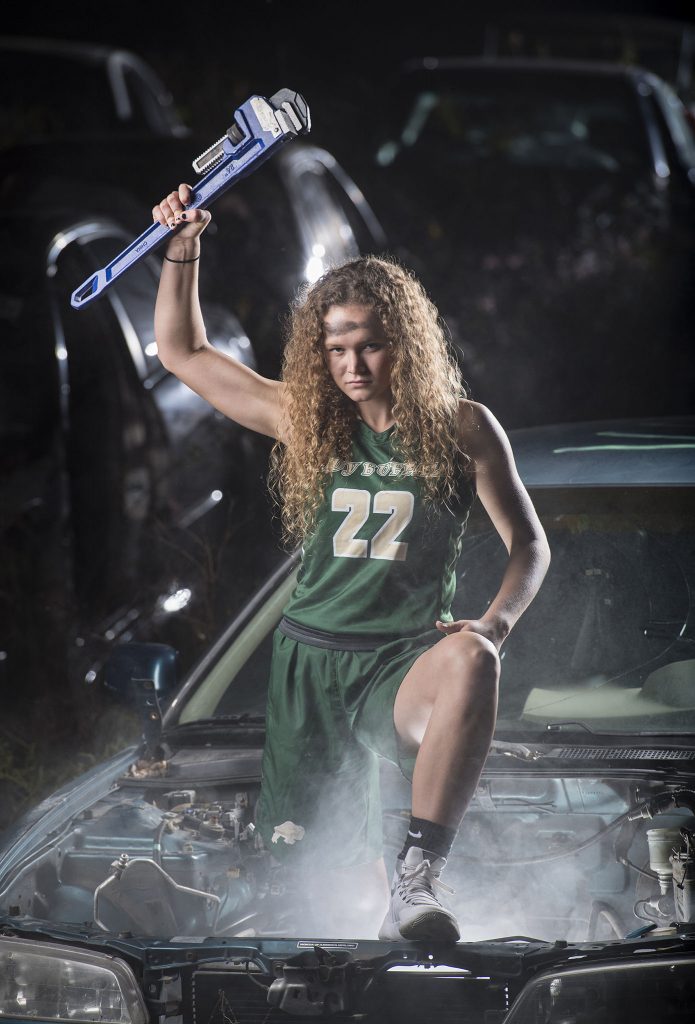 But now comes the really exciting part. Seeing the final product in print. I knew these were going to run as four full-page verticals. But knowing that and seeing that kind of print real estate occupied by your images are two very different things. 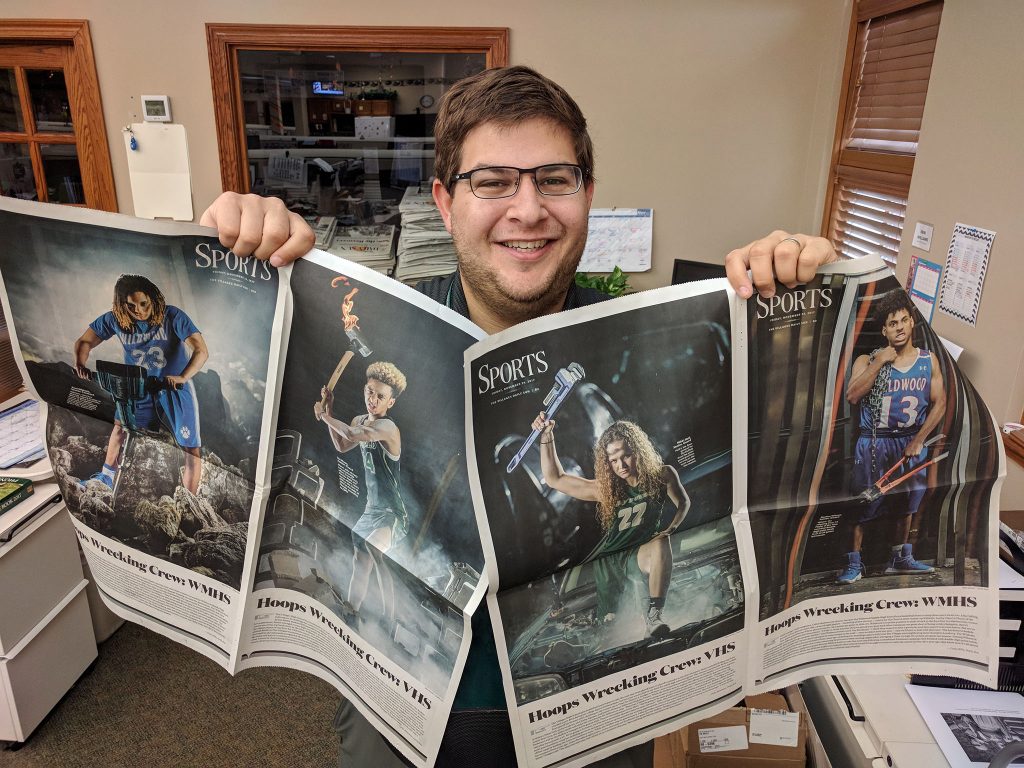 The printed edition of The Villages Daily Sun with the Hoops Wrecking Crew photos. ©2017

The final pages of the Hoops Wrecking Crew project. ©2017

I couldn’t have pulled this off without the help of my coworker, Michael Johnson. He was at each shoot as late as I was, and back the next day with the fire and excitement to make the next image better than the one before.

For additional commentary on these frames, check out an interview I did with The Talking Pictures Podcast.