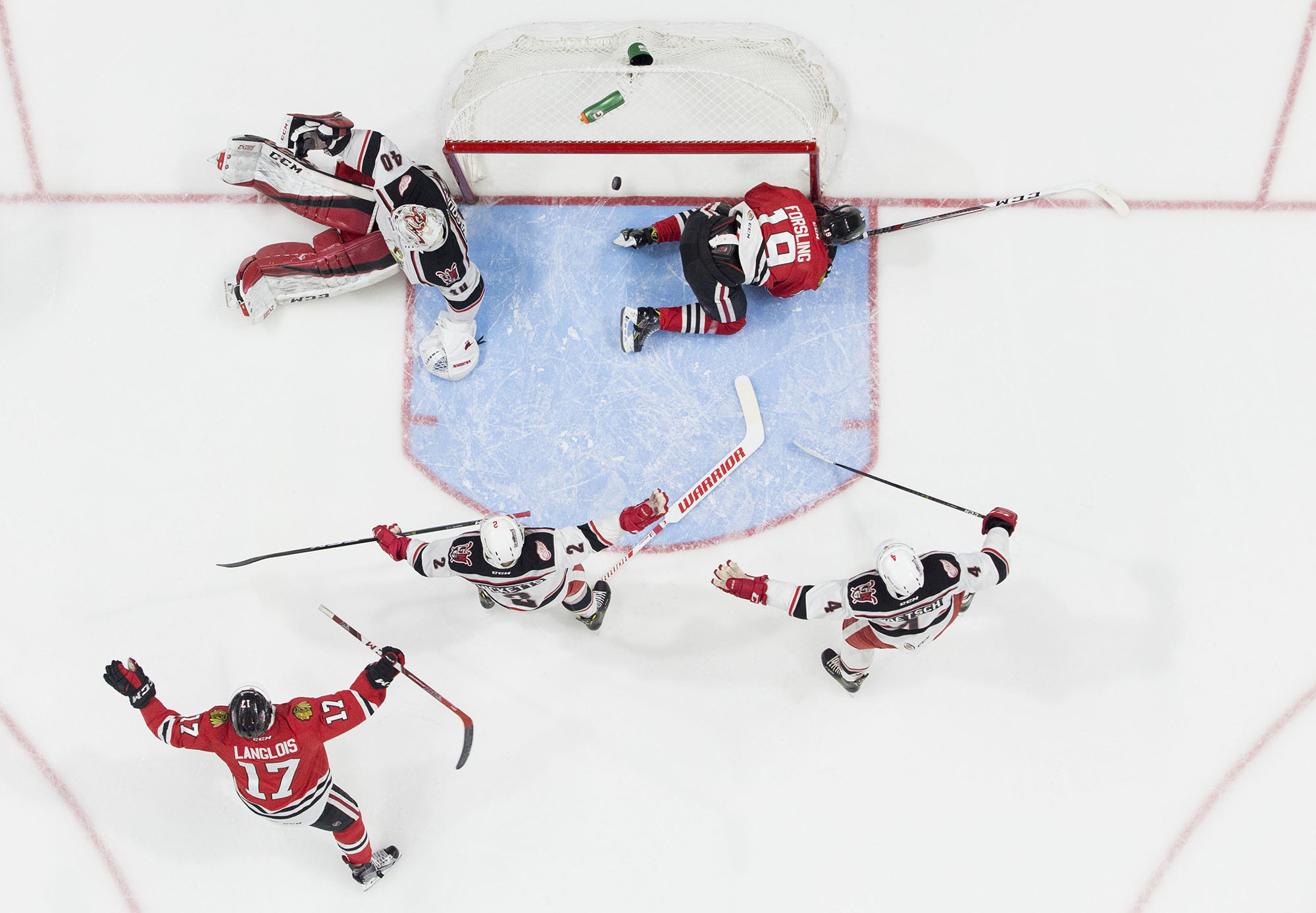 There’s a first time for everything. Last Saturday, it was my first time hanging a remote camera for hockey.

Don’t get me wrong. I’m no stranger to remotes in general. I’ve used them at other sports like basketball and soccer. Heck, I’ve even had a remote on the wing of airplane back in 2007.

In 2007, I mounted a Canon 5D with a Sigma 15mm fisheye lens on the strut of a Cessna 172 Skyhawk using a Manfrotto Super Clamp, a small tripod head, steel safety cables and lots of gaff tape. ©2007 MAX GERSH

A photo from my wing strut-mounted remote camera as we fly over the Mississippi River near St. Louis, Mo. A drastic temperature shift caused dense fog to rise from the river. Shot on a Canon EOS 5D, Sigma 15mm fisheye, ISO 200 1/400 sec @ f/10. ©2007 MAX GERSH

All that being said, in the 6+ years that I’ve been at the Rockford Register Star covering the Rockford IceHogs, the AHL affiliate for the Chicago Blackhawks, I’ve never put a remote camera up in the catwalk.

So as the season is winding down, I remembered a conversation with a local student photographer, Tyler Yomantas. Months ago when we were both covering the Harlem Globe Trotters, he talked about shooting the game from the catwalk.  It was a great perspective. So a few days before the IceHogs game, I reached out to him as well as representatives from the team and venue.

Tyler helped me decide how long of a lens I would need for my remote. By looking at a few of his frames, we knew that I’d be much better off with a 70-200 than a 300mm lens (although I have ideas for a remote 300 now).

I then reached out to my friend and extremely talented photojournalist Andrew Nelles, as he hangs remotes in his sleep. I had concerns about the wireless triggers working while surrounded by all of the metal of the catwalk. We talked things through and it seemed like I was on the right track and had all the gear I was going to need to do the job effectively and safely.

I can’t stress the “safely” part enough. If my gear isn’t secure, there’s a chance it could fall several stories onto the ice. Best case scenario, tens of thousands of dollars of camera gear shatters to bits. Worst case scenario? You can do the math.

So let’s look at the parts of a remote. First, the mount. It’s pretty much standard to clamp onto a rail (or anything) with a Manfrotto Super Clamp. These things grip everything don’t budge.

To get some distance from the rail, I connected a Manfrotto Magic Arm. It’s essentially two arms connected at a center pivot with ball heads on either end. If you’re investing in one of these, definitely get the variable friction knob version. It lets you lock things into place way easier than the lever one (which I was using).

I had a simple camera mount at the end of that.

In theory, that shouldn’t go anywhere. But that’s not good enough. I use hose clamps on multiple sections of the arm, the camera, the camera mount, the lens… everything. I run stiff key rings through those. I then take long lengths of gaff tape to prevent the key rings from ever opening. I then use multiple steel safety cables designed to catch falling theater lighting to run through each of those rings and secure back to the rail. So if I end up in the bizzaro world where my lens somehow detaches itself, nothing will fall to the ice.

To trigger the remote camera, I use Pocket Wizard Plus III transceivers. One is connected to the remote camera by a pre-release cable. The other can either be handheld and triggered manually or by sitting in my handheld camera’s hotshoe. I went the handheld route.

To secure the Pocket Wizard and the pre-release cable switch box, I put some heavy duty velcro on the back of each, as well as on the Magic Arm. This let me orient the Pocket Wizard vertically no matter which way the arm was extended. They were both secured through the safety cable as well.

Here’s what the whole setup looked like up in the catwalk.

A remote Canon 1DX with a 70-200 f/2.8 hangs from the catwalk on a Manfrotto Magic Arm/Super Clamp. Also attached is a Pocket Wizard Plus III transceiver, a pre-release cable and several steel safety cables. ©2017 MAX GERSH

Using LiveView on the Canon 1DX to frame the remote camera. ©2017 MAX GERSH

A catwalk selfie after getting the hockey remote hung. ©2017 MAX GERSH

Once the framing, focus and zoom were set, everything was taped down. Last thing I want is for the camera to change things on its own!

And that’s really it. At that point, all I had to do was push a button! Ordinarily, I’d use up a separate small trigger button so I don’t have to hold the entire transceiver, but I couldn’t find the one I have. Things tend to get lost in bags of bizarre connectors and wires.

Here’s a few frames from the remote.

Grand Rapid’s Martin Frk (27) sneaks the puck past IceHog goalie Jeff Glass (30) to take a 2-0 lead in the second period Saturday, March 25, 2017, during a game at the BMO Harris Bank Center in downtown Rockford. Grand Rapids went on to shut out the IceHogs 4-0. [MAX GERSH/RRSTAR.COM STAFF] ©2017

It’s always fun when a fight breaks out right under your remote!

A fight breaks out between IceHogs and Grand Rapids players Saturday, March 25, 2017, during a game at the BMO Harris Bank Center in downtown Rockford. Grand Rapids went on to shut out the IceHogs 4-0. [MAX GERSH/RRSTAR.COM STAFF] ©2017

IceHog Jeremy Langlois (17) celebrates after teammate Brandon Mashinter (53) sneaks the puck into the goal early in the first period Saturday, March 25, 2017, during a game against Grand Rapids at the BMO Harris Bank Center in downtown Rockford. The goal was waved off because of contact with Grand Rapid’s goalie Eddie Pasquale (40). Grand Rapids went on to shut out the IceHogs 4-0. [MAX GERSH/RRSTAR.COM STAFF] ©2017

Grand Rapid’s goalie Eddie Pasquale (40) blocks a shot by IceHog Brandon Mashinter (53) with his foot Saturday, March 25, 2017, during a game at the BMO Harris Bank Center in downtown Rockford. Grand Rapids went on to shut out the IceHogs 4-0. [MAX GERSH/RRSTAR.COM STAFF] ©2017

More photos from the game, both from my handheld camera and the remote camera, can be seen in a photo gallery on the Register Star’s website.

I’d call that a successful first go for a hockey remote.