Some of my friends think my job is glamorous. I get access to many things the public doesn’t get to see other than through my pictures. Some of those things aren’t always easy to witness.

This week I witnessed one of the worst car accident’s I’ve ever seen.

I had just gotten off work. I was at home putting some food into a skillet to cook dinner. That’s when I got the call from my news editor. A call had come over the police scanner indicating there was a wreck with entrapment.

I hustled out the door and headed the short distance to get to the scene. As I got closer, I could see there were a lot of emergency vehicles. I called my news editor back to give him an update. That is when he told me they were sending a lifeline helicopter to the scene.

I pulled off the road when I got nearby. I put on my reflective vest (required by law for media personnel) to make sure I was visible at the scene. I grabbed my camera and rushed into action.

Instinctively, I started taking pictures where ever the action was. First, that was of a kid that the police and medics were talking with. 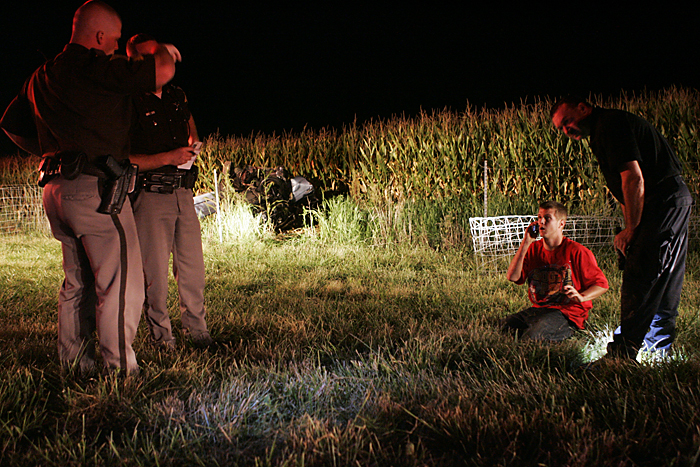 Justin Ryan Pierce, 19, of Mount Summit, talks on his cell phone late Wednesday night after crashing a 1987 Mercedes-Benz in a cornfield near the intersection of Road 300S and Ind. 103. His passenger, Jimmy Luna, 17, of New Castle, was flown from the scene to Methodist Hospital in Indianapolis. (C-T photo Max Gersh) ©2010

Then, I noticed the crumbled Mercedes in the cornfield. I moved that way. 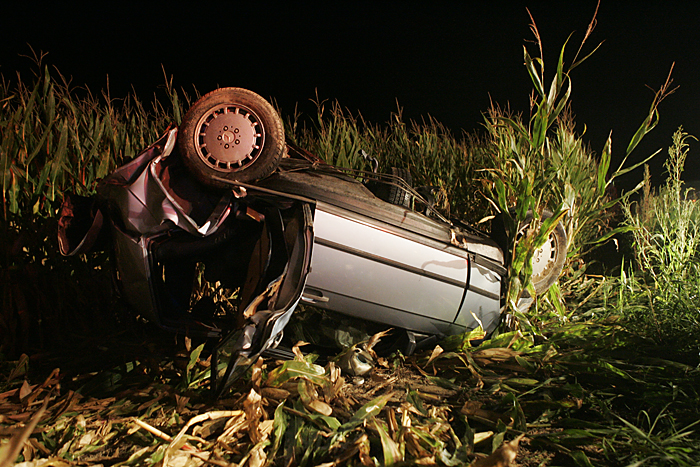 A 1987 Mercedes-Benz lies mangled in a cornfield late Wednesday night after crashing near the intersection of Road 300S and Ind. 103. (C-T photo Max Gersh) ©2010

The vehicle was so badly mangled, police officers could not locate the license plate and instead had to fight a door open ro get the vehicles VIN. 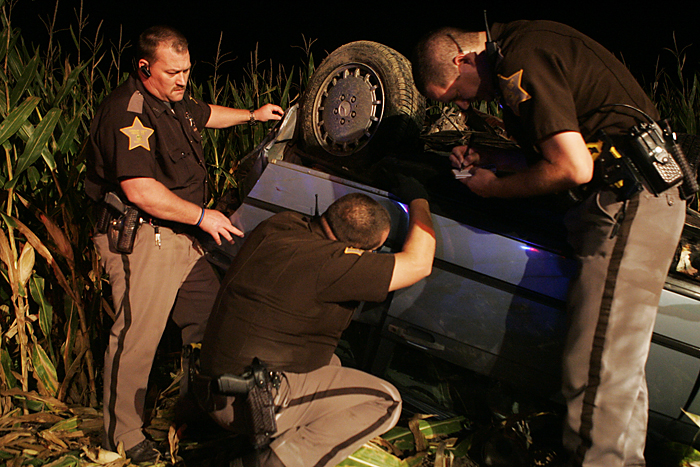 Henry County Sheriff Deputies take down the VIN number off of a 1987 Mercedes-Benz late Wednesday night after it wrecked in a cornfield near the intersection of Road 300S and Ind. 103. (C-T photo Max Gersh) ©2010

Just by observation, pieces of the puzzle started to come together. It was a single car accident. The kid talking with the emergency responders was the driver. His passenger was still stuck in the car.

I worked the scene as best I could in such poor lighting conditions. I took special care to stay out of the way of all of the police, medics and firefighters on the scene. I respected their space and in turn, they respected mine. I had full access to the scene.

I was there as they pulled the passenger from the vehicle. 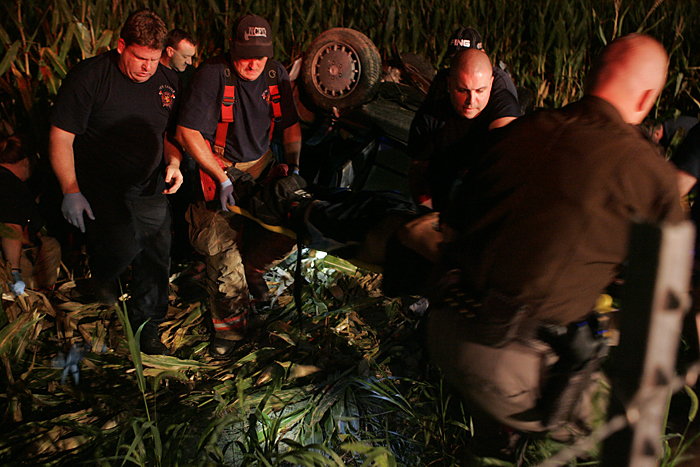 Emergency responders carry Jimmy Luna, 17, of New Castle, from a mangled vehicle to a waiting ambulance Wednesday night near the intersection of Road 300S and Ind. 103. (C-T photo Max Gersh) ©2010

I was there as they checked the driver for injuries. 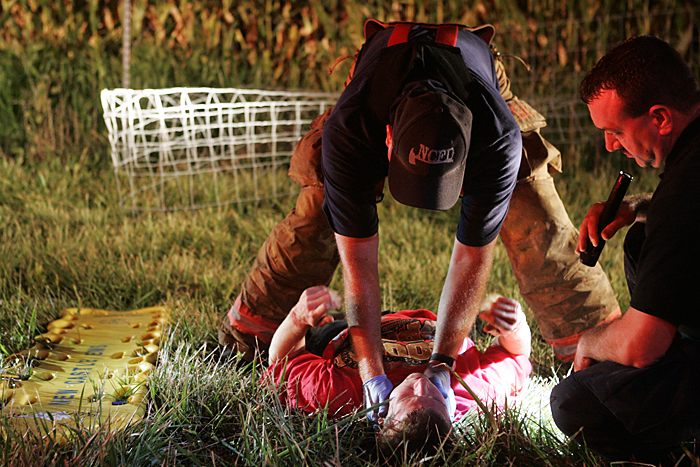 Emergency responders check Justin Ryan Pierce, 19, of Mount Summit, for injuries late Wednesday night after he crashed a 1987 Mercedes-Benz into a cornfield near the intersection of Road 300S and Ind. 103. (C-T photo Max Gersh) ©2010

I was there as the lifeline helicopter landed and then again as it took off.

While I have become rather calloused to difficult events like this, they still have an effect. They make you think about yourself. Your friends. Family. Coworkers.

It is my job to tell you these stories. Sometimes the photos can make you cringe. Hopefully that means they are conveying a powerful message.

Be safe out there.