Have you ever wondered what the St. Louis Gateway Arch and its surroundings would look like if it were its own planet?

Probably not…But I did.

Today, I went down to the Arch grounds with the express purpose of making a 360 degree panorama and warping it into a two-dimensional globe. I only had a vague idea of what I was doing.

Just like any panorama, it is best to set your camera on a tripod to get equal and level rotations. I set my Canon EOS 1D Mark II on the tripod and took pictures in a full circle with the camera leveled. I then made a second and a third pass, one with a high angle of view and one with a lower angle.

This was tedious. I had to make sure there was some overlap so the photo stitching would be easier. It wasn’t long before my friend, Gavin, had a better suggestion for capturing the angles.

He recommended putting my camera in full motor drive (8.5 frames per second on my camera) and just spin it quickly while running a circle around the tripod. This worked like a charm capturing at very even and overlapping intervals.

After capturing 89 frames, I rushed home to see my finished product.

I opened Photoshop’s photomerge program and set it to auto. I figured that I could fine tune the problem spots by hand.

An hour later, my straightened 360 panorama was complete.  One step remained. Stretch the image so it is equal in height and width and then run a Polar Coordinates filter on it.

After all that work, I was tremendously disappointed. 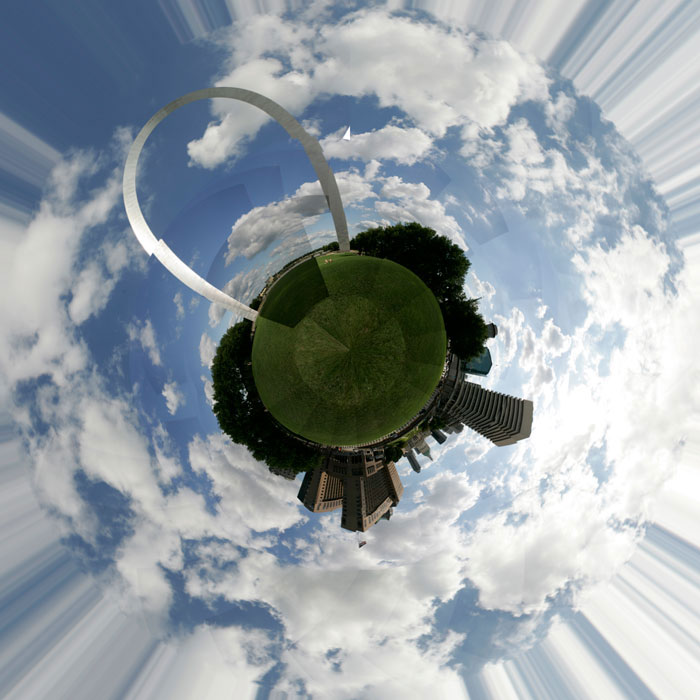 That is when I decided to edit it a different way. I had read about a method of 360 photo merging called stereographic projection. In essence, it is a way of wrapping the images without distortion around a circular (almost spherical) plane. That yielded much better results. 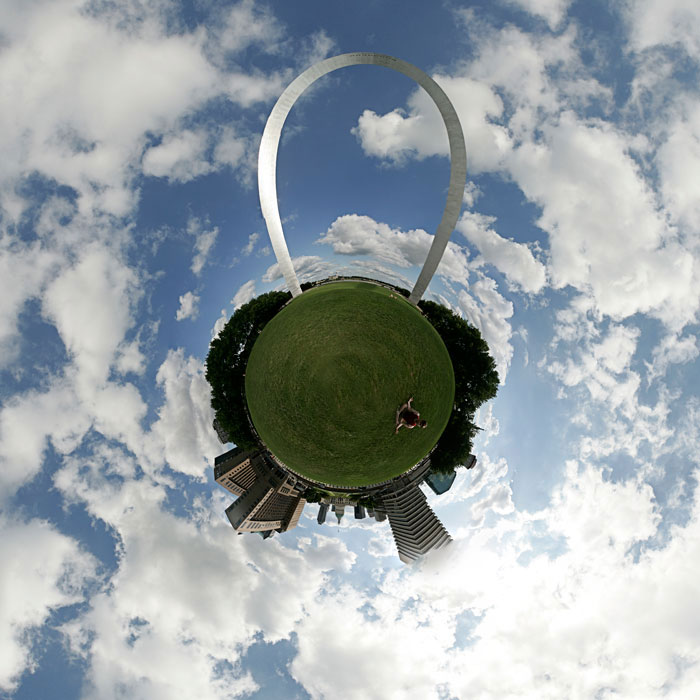 Stereographic projection of the 360 panoramic of the St. Louis Arch grounds. All merge lines have vanished and the distortion is so minimal that you can even clearly see my friend sitting on the grass meditating. ©Max Gersh 2009

One St. Louis themed Little Planet / Wee Planet / Stereographic Projection down. The rest of the town to go.