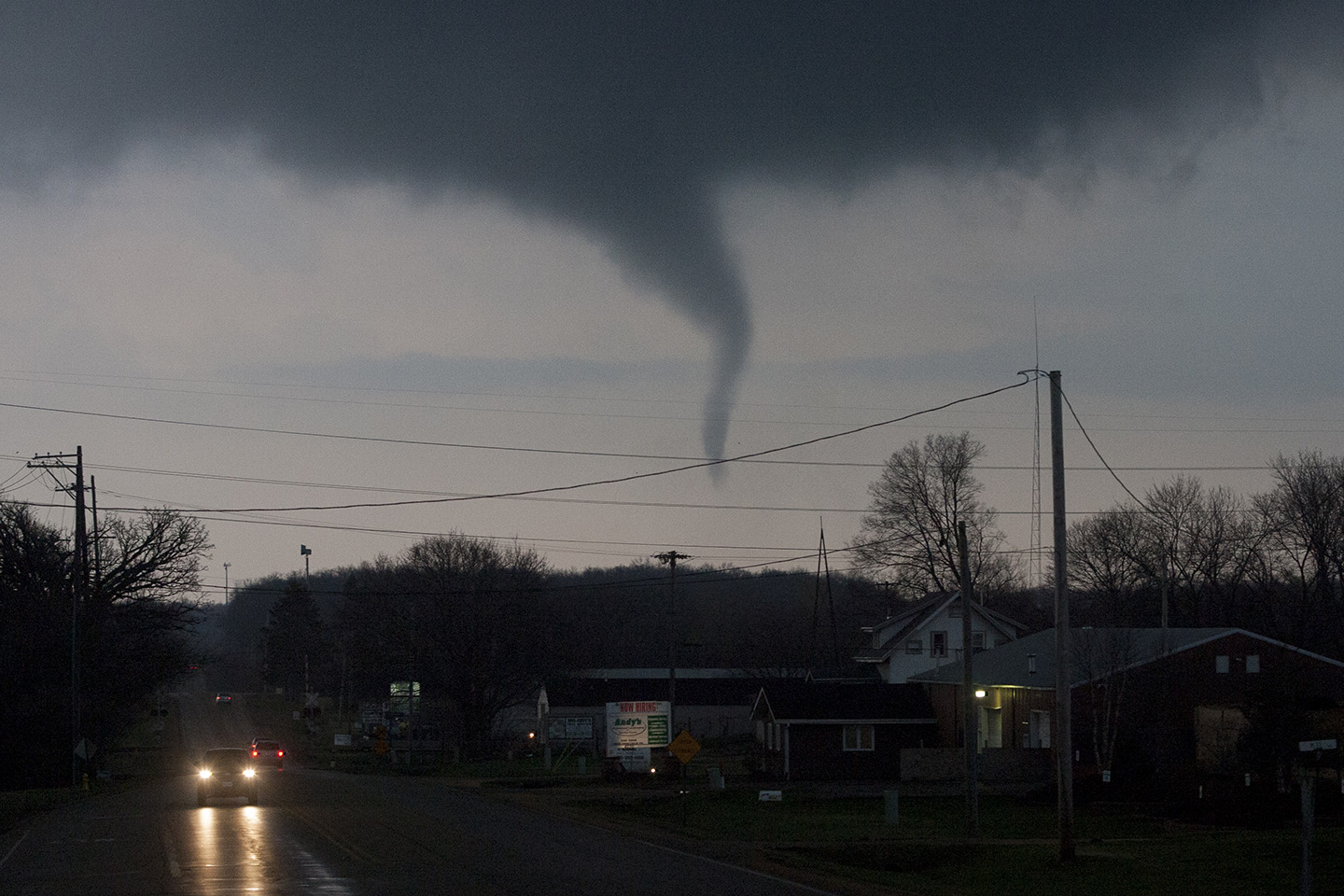 I work hard to provide real-time images from the field during spot news. Severe weather is not an exception.

Going into Thursday, April 9, we knew Rockford was in an area that was expecting active weather. I prepared my car and planned on staying out all day.

Let me back up a bit. While I’m no meteorologist, I know more about weather than the average Joe. I’ve taken multiple storm spotter training courses with the National Weather Service. I have also learned to read different radar views. When home, I use GRLevel3 software on my computer, and I use RadarScope on my Android phone. Both allow me more detailed views of what’s happening.

As April 9 began, I made sure my car was outfitted with the equipment I needed to stay safe. While I always have a police scanner in my car, I added a second one just tuned to the local SKYWARN frequencies. In addition, I hooked up my portable ham radio. As a licensed amateur radio operator (KD9DBF) and trained weather spotter, I’m able to use my radio to call in to the SKYWARN frequencies to relay real-time weather reports to the National Weather Service. 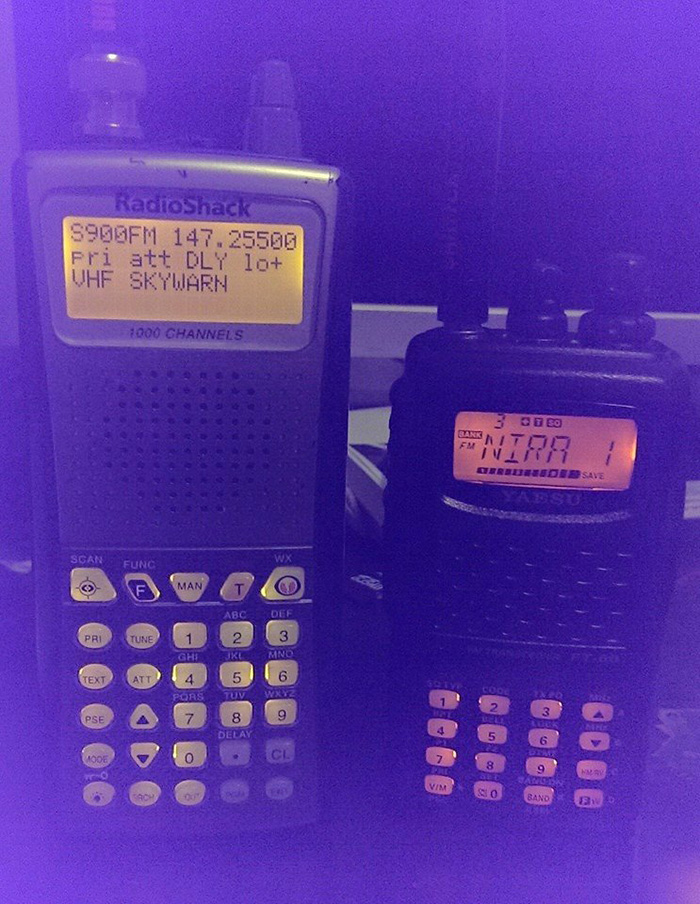 The first round of storms to roll through the area were mostly non-severe. There was a little bit of hail. Some strong wind gusts. That was about it. However, a storm moving in from the west looked to be particularly active.

The areas around the storm were under a tornado warning pretty much from Iowa. It stayed that way as it entered the Rockford region. Local SKYWARN weather spotters (myself included) began to position ourselves around town. As we were able to dial in on the path of the storm, I moved farther east where I had a clear view. 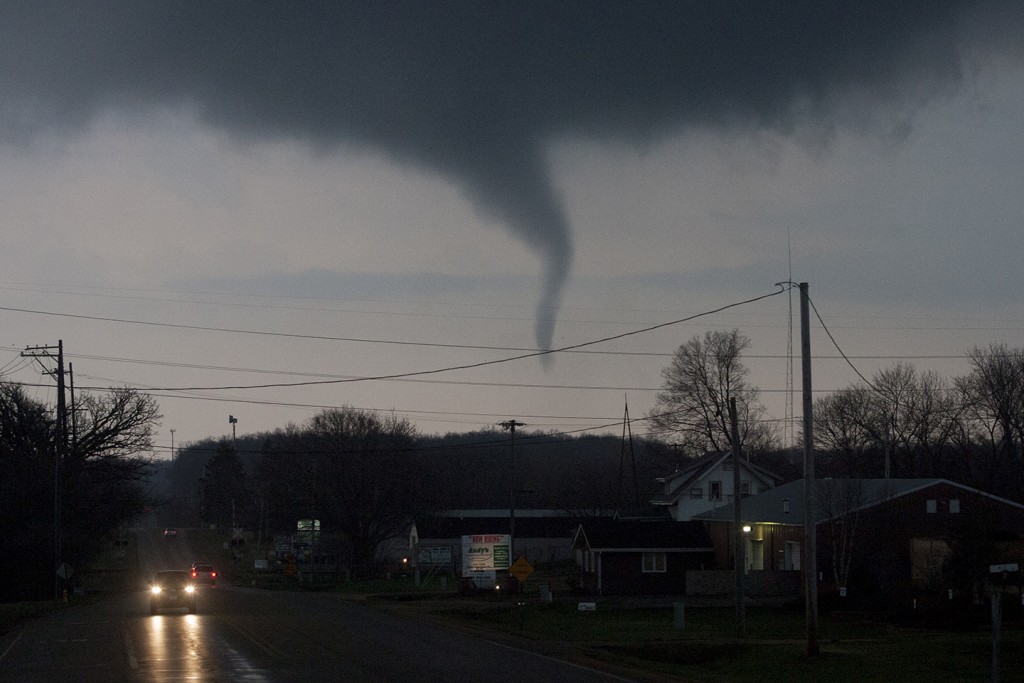 I continued to follow the storm as it moved east. That is until I heard about the other storms still to my west. Spotters southwest of me were reporting a large wedge tornado on the ground. All I could see was heavy rain heading my way. I knew that if I wanted a picture of this storm, I’d have to get south of its path. However, at the speed the storm was traveling, I wasn’t going to risk racing to get in position. My life is more valuable than a picture. Instead, I took the quickest escape route to get out of the path of the storm. 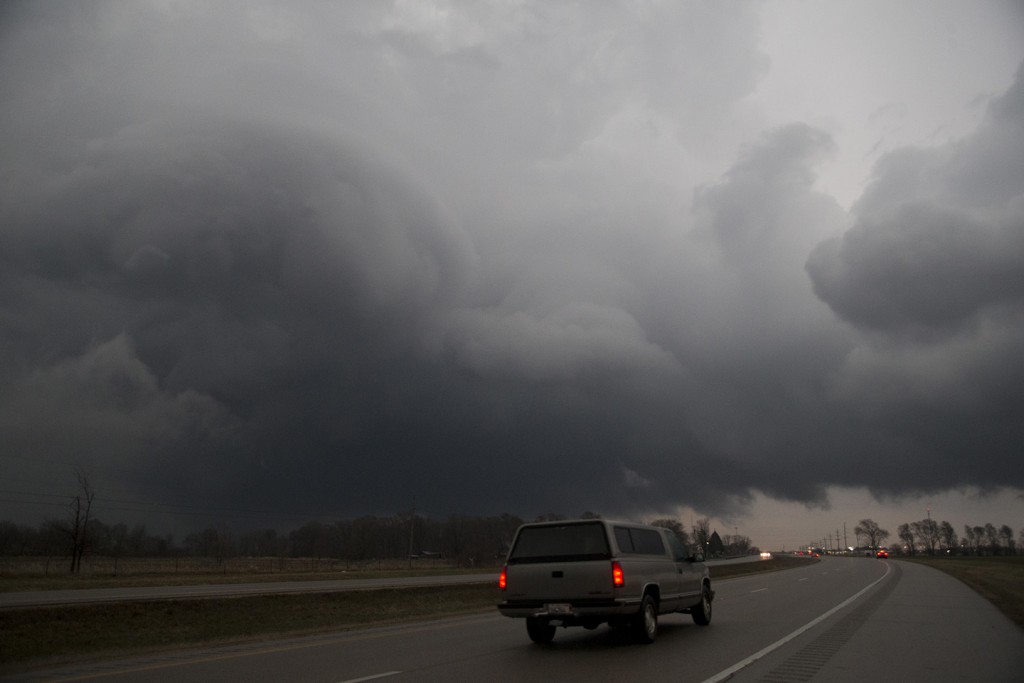 As soon as it passed, I tried to get down to the town of Fairdale where the large tornado had passed through. I decided to try and go in on the south side of the town. Police had already set up barricades and I couldn’t get in to town. I photographed what I could on the periphery. 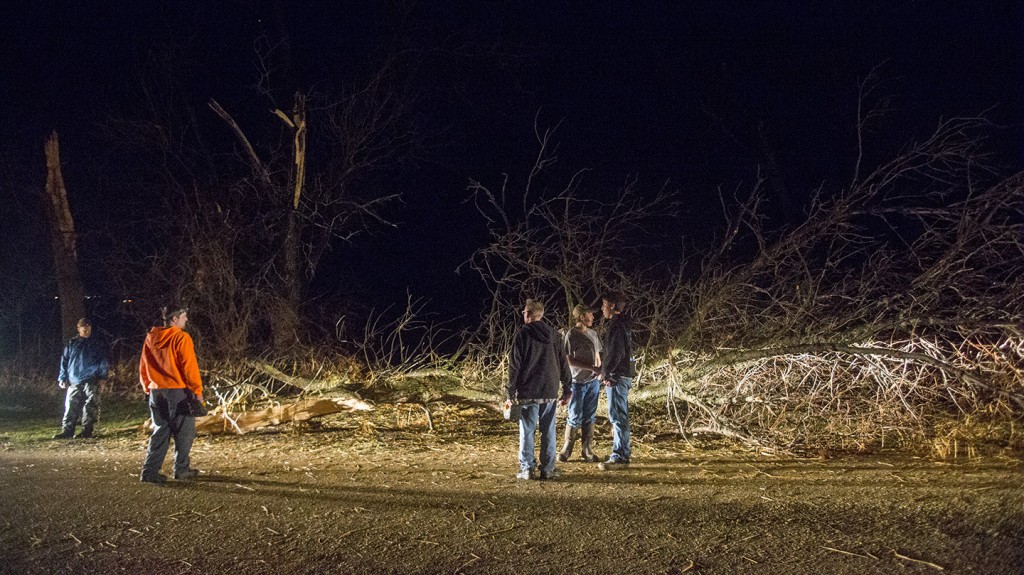 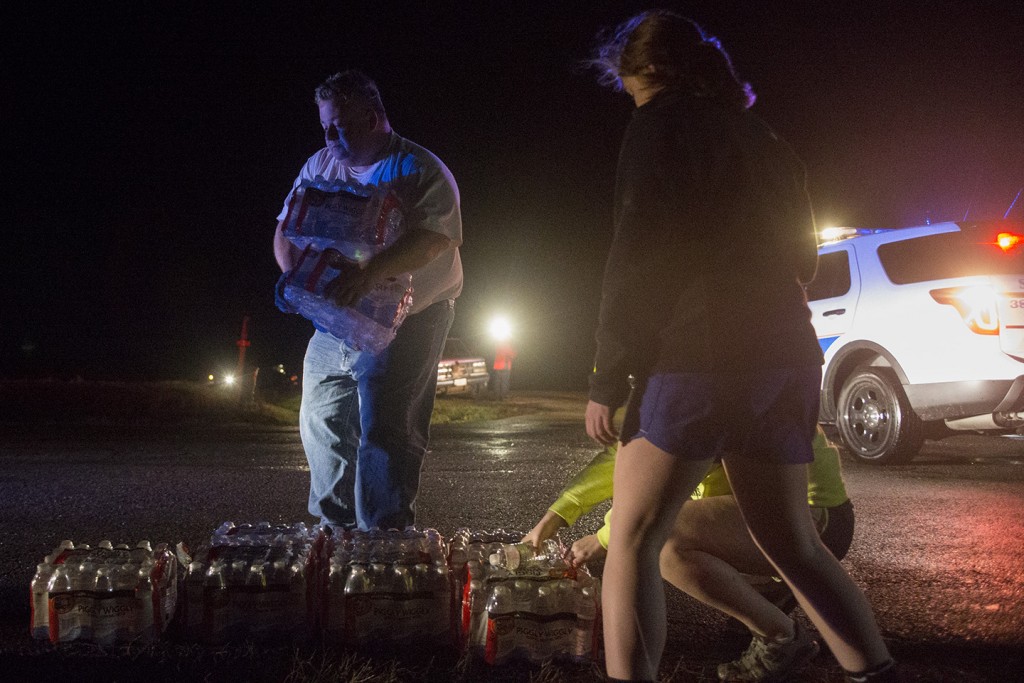 Andy Dabros of Genoa drops off 20 cases of water at Fairdale and Quarry roads on Thursday, April 9, 2015, in Kirkland. Dabros’ wife, Melissa, grew up in the town of Fairdale. MAX GERSH/RRSTAR.COM ©2015

The following Friday and Saturday I was off work. While I was frustrated that I wasn’t following this news story, I didn’t want to go on my own, unaffiliated with any media outlet, just to make pictures of a tragic situation. There were enough photographers there. I didn’t need to add to the media circus if I didn’t have a legitimate media purpose to be there.

On Monday, I went down to Rochelle, another town clipped by the storm. The damage was humbling. Much of it had already been cleaned up into neat piles. Some homes were entirely gone. Volunteer groups were still working to clear debris. 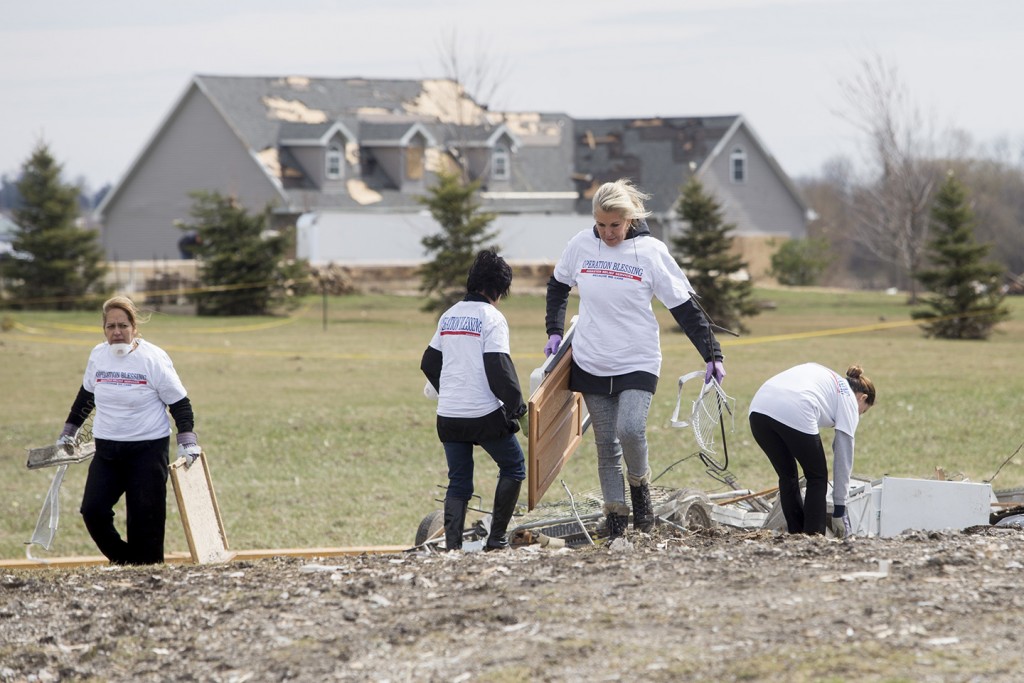 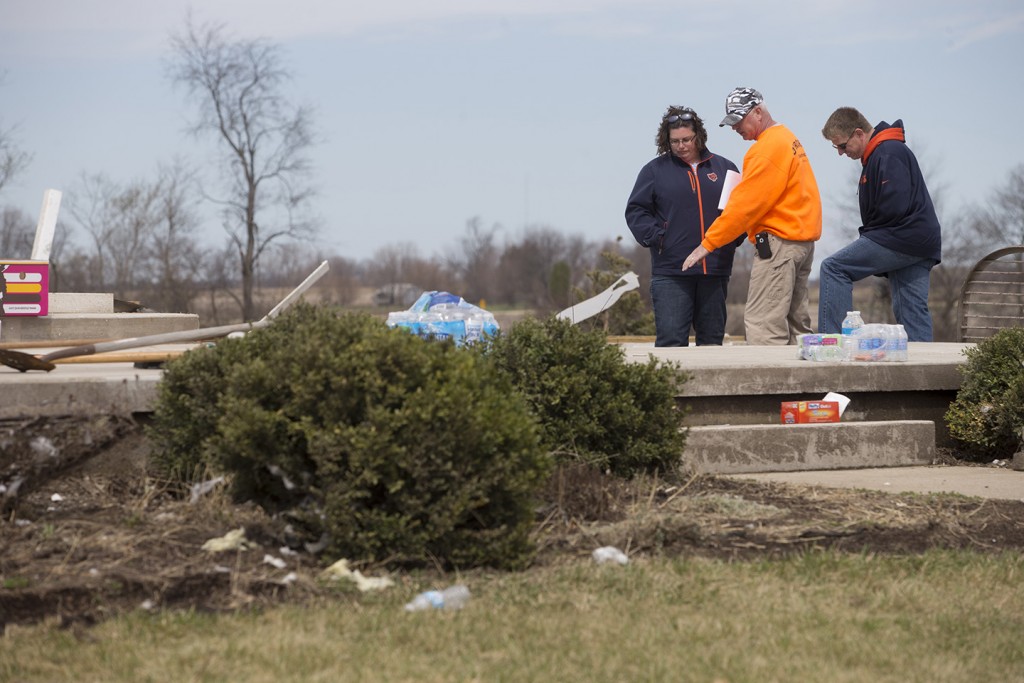 John Whitaker (right) and his fiancee, Emily Dickow, talk with a contractor on the foundation of what remains of their home Monday, April 13, 2015, on South Richard Road in Rochelle. MAX GERSH/RRSTAR.COM ©2015 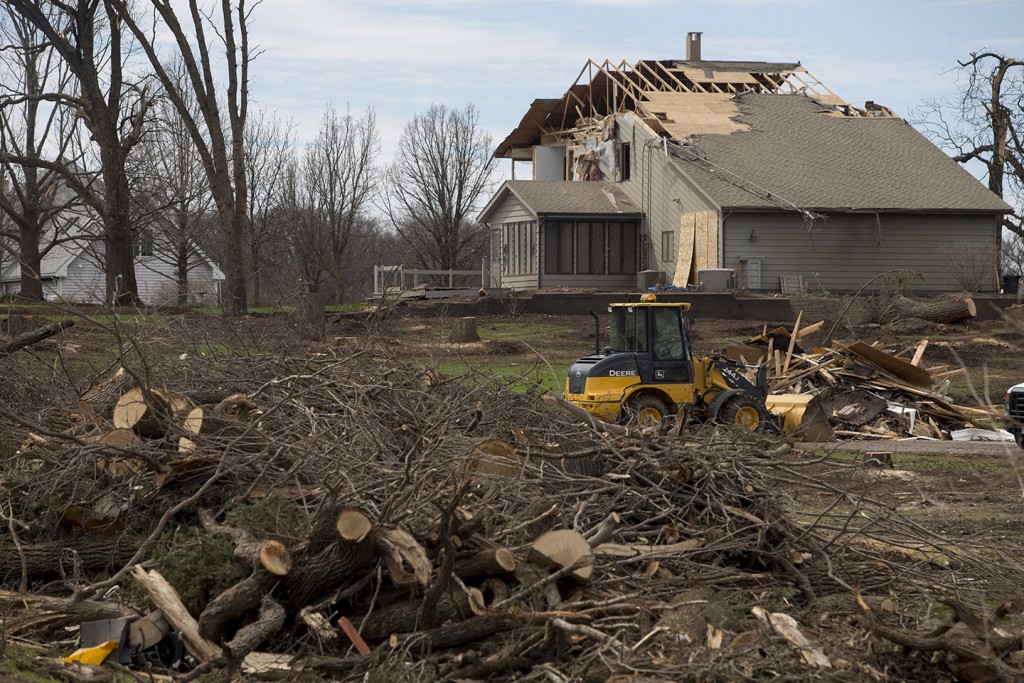 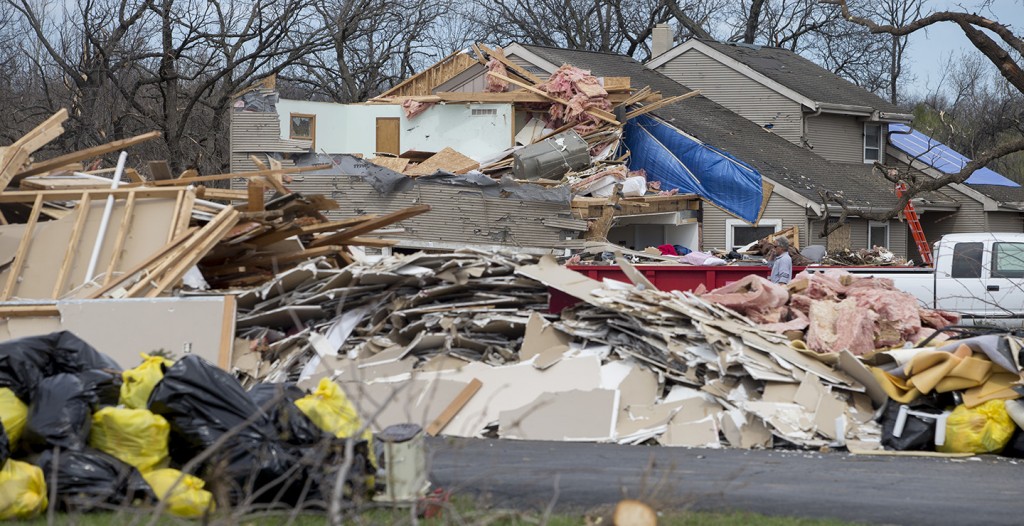 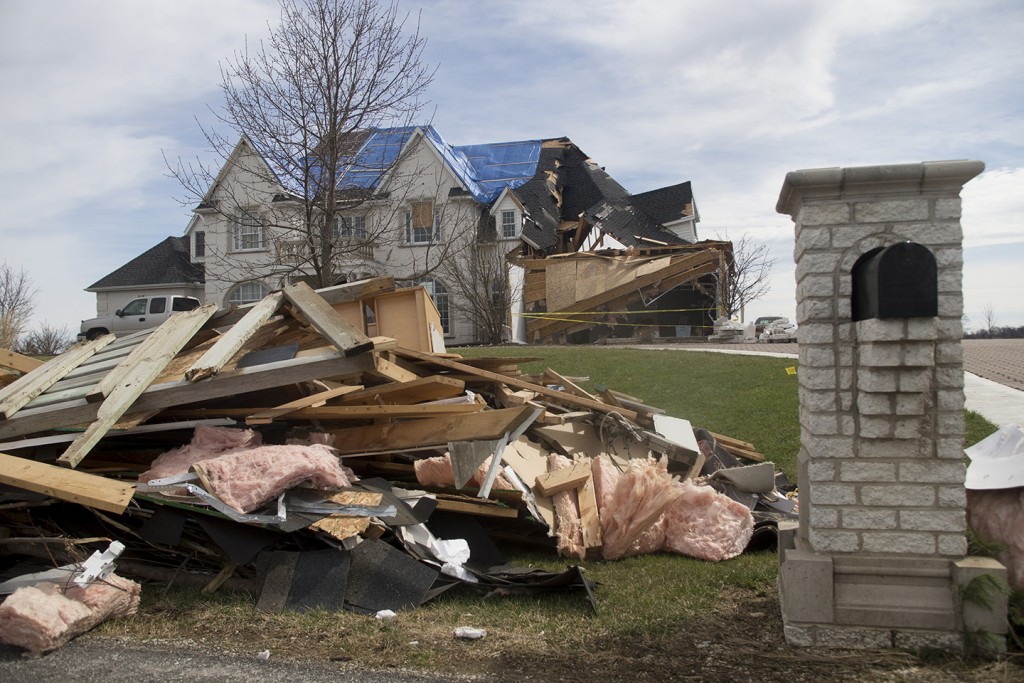 On Tuesday, I was able to get into Fairdale. It looked like a bomb had gone off. It’s terrifying to think that this was caused by weather. 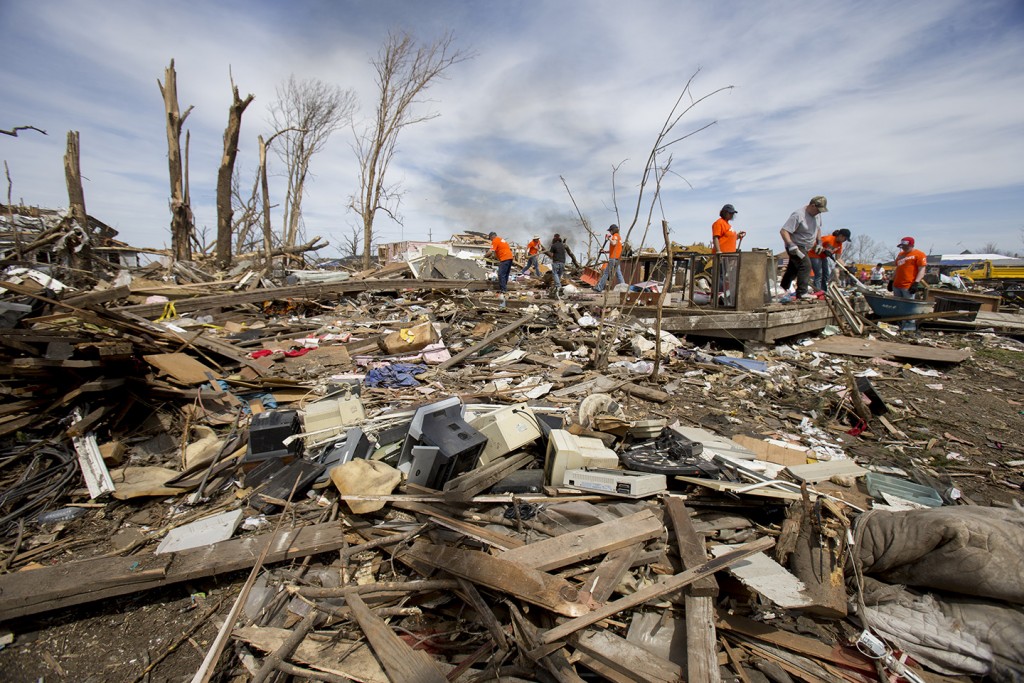 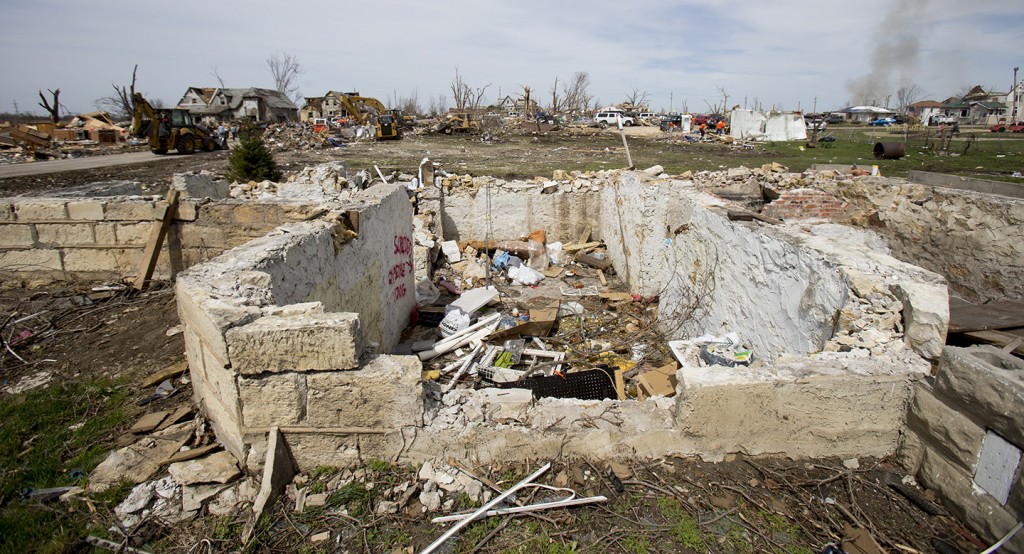 Debris is scattered around the remnants of homes Tuesday, April 14, 2015, in Fairdale. MAX GERSH/RRSTAR.COM ©2015 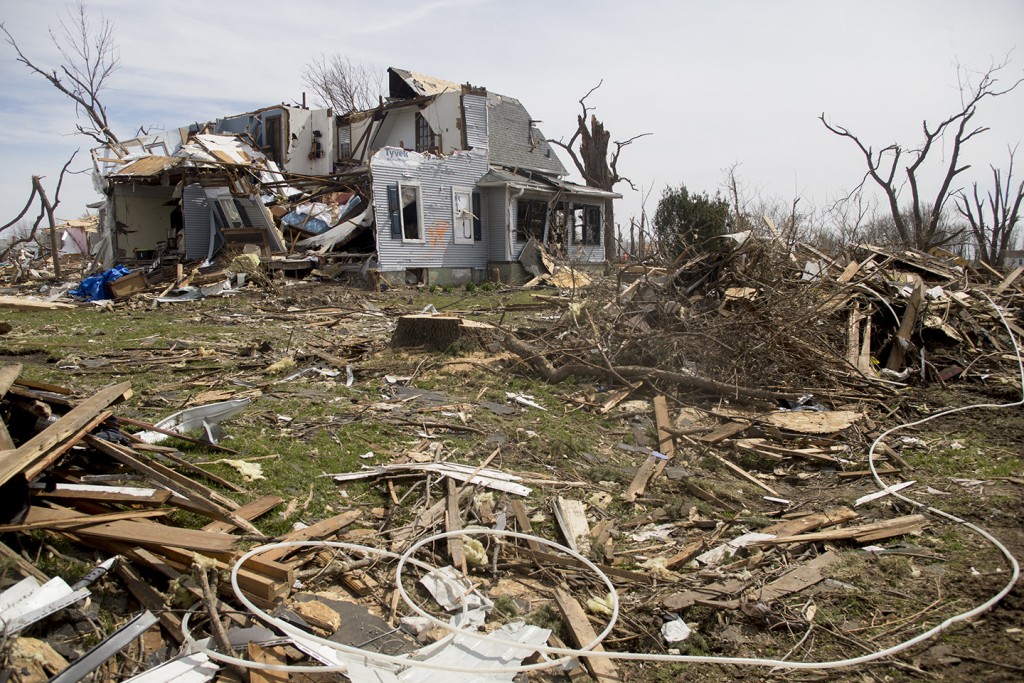 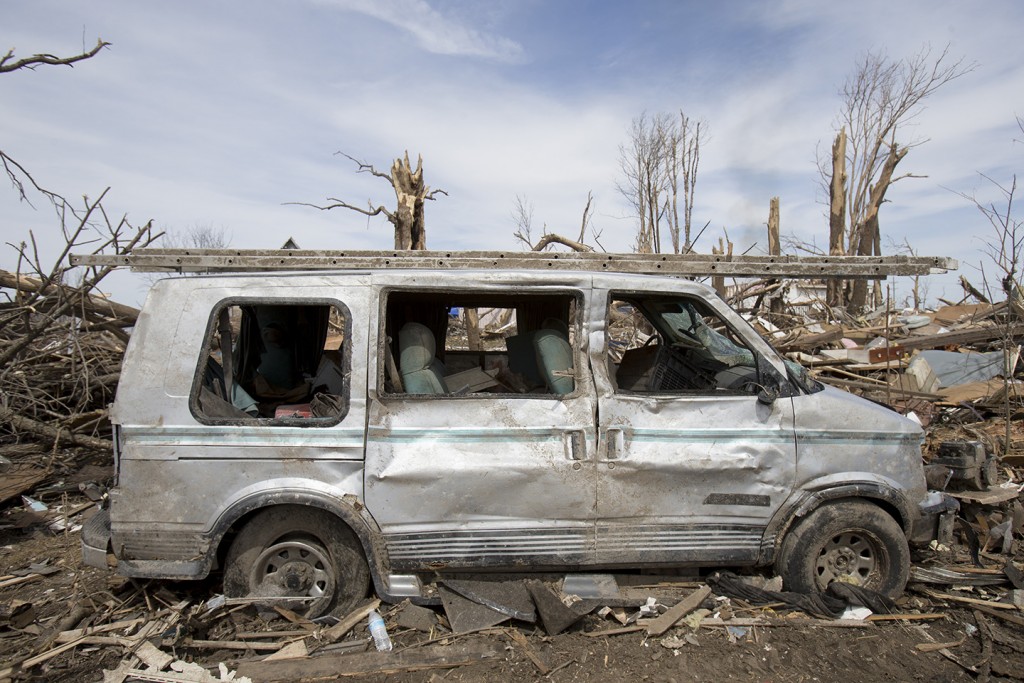 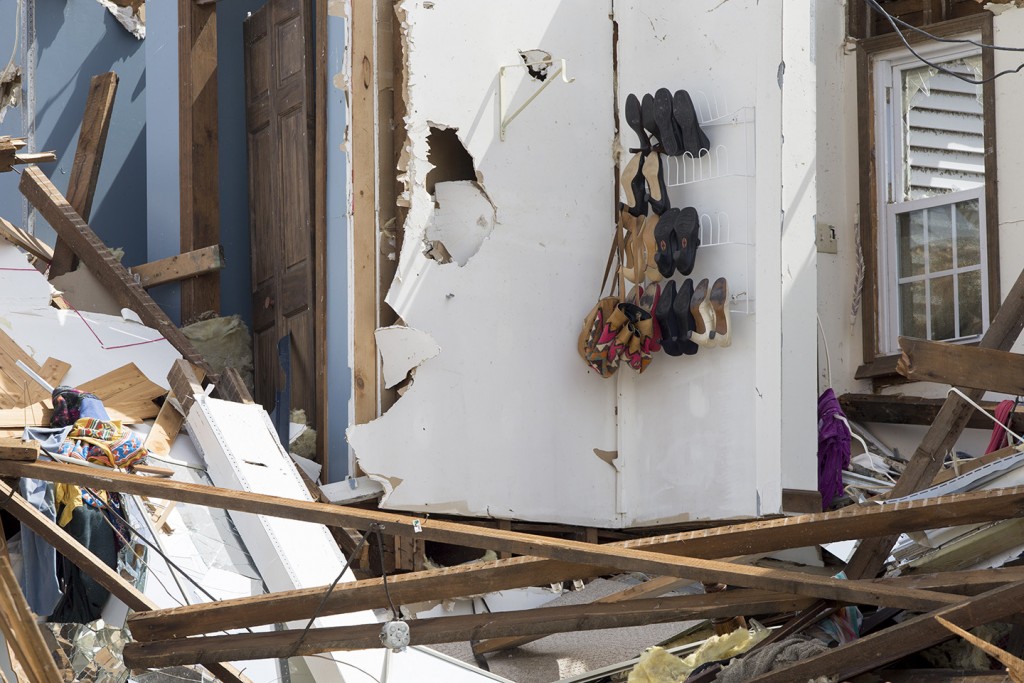 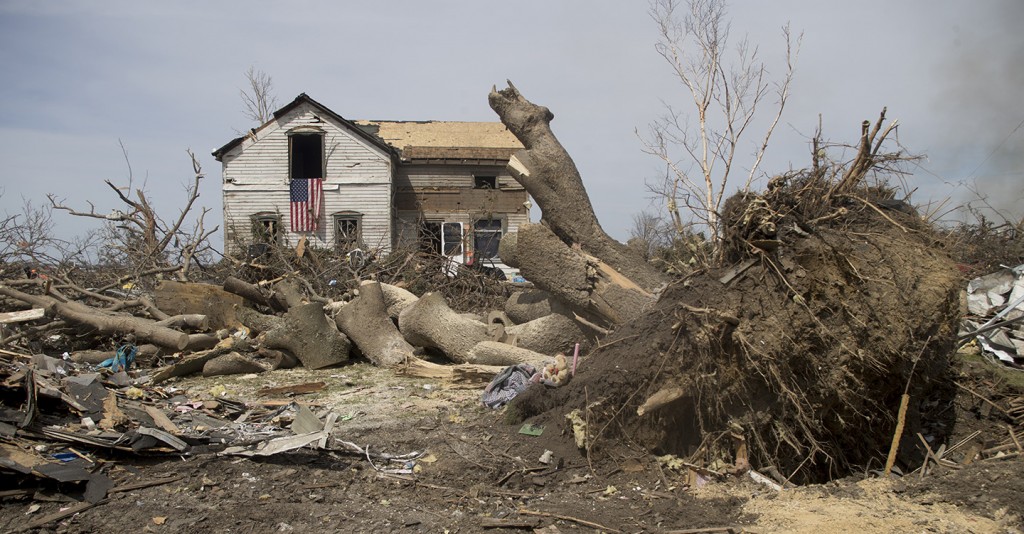 An uprooted tree sits in the front yard on a tornado-damaged home Tuesday, April 14, 2015, in Fairdale. MAX GERSH/RRSTAR.COM ©2015 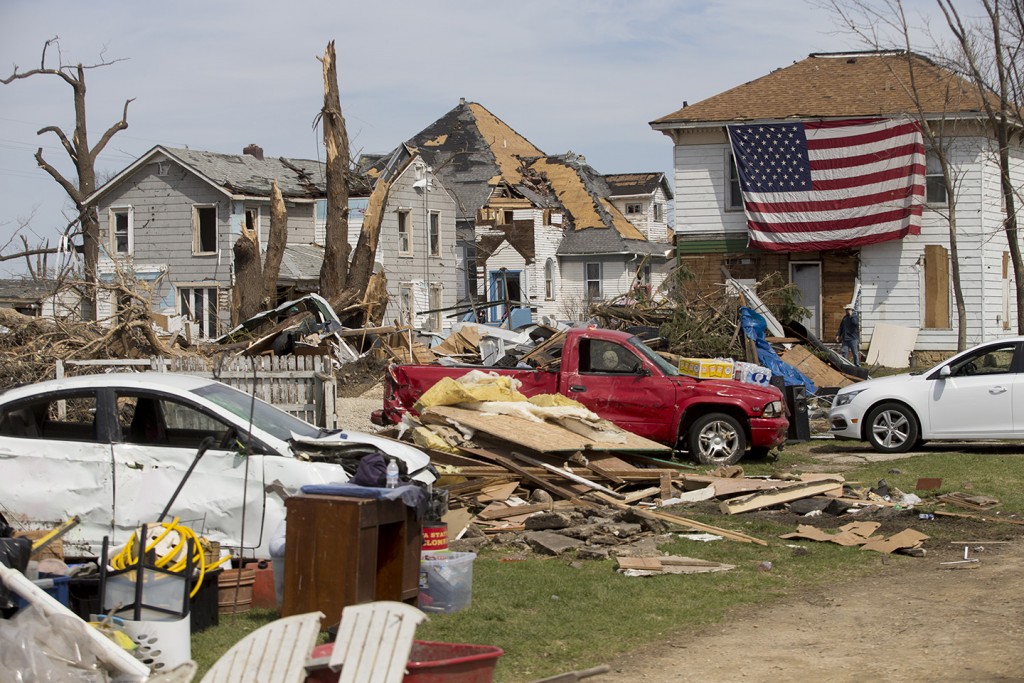 As long as I work in the midwest, I’m sure this won’t be the last time I cover a tornado.