Not your everyday newspaper photos

Like I said in my previous post, I enjoy the challenge that comes with newspaper photojournalism. There is something different to shoot every day and I am obligated to make it visually appealing.

Earlier this week, I was given the task to photograph two high school swimmers that made it to the state finals. The reporter was meeting them at the beginning of their swim practice. I think he was under the impression that I would come and take a standard environmental portrait.

I decided to try something a little different.

When I was thinking about an environmental portrait, I came to the conclusion that their environment was in the pool, not at the pool. I wanted to take an underwater portrait.

I can’t afford an underwater housing for my camera so I had to improvise. One 10-gallon aquarium later, I was ready to go.

I set the camera longways in the aquarium with a 24-70mm lens attached and set at 24mm. The camera was triggered by a Pocket Wizard which in turn fired my 550EX Speedlight flash.

Because I was uncertain how the water would scatter my light, I wanted to do my best to directionalize my flash. I attached a Gary Fong PowerSnoot which turned my flash into a high-powered spotlight.

After a little experimentation, I got a shot I was satisfied with. 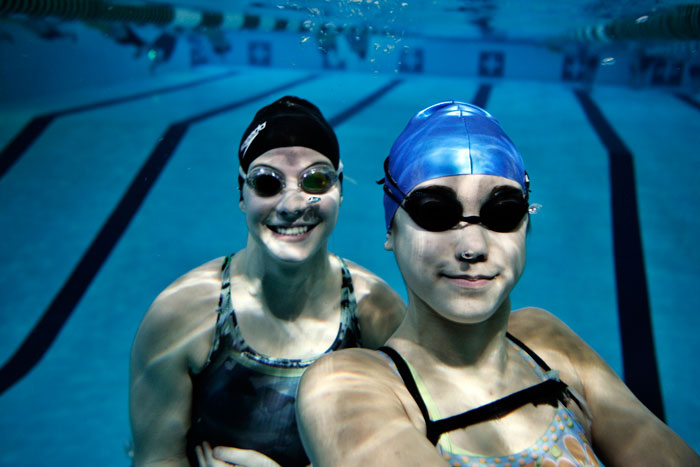 Is this perfect? Not by a long shot.

The biggest problem is just what I expected. The lighting. I feel that I probably needed at least one more light. It would also have been preferable to have those lights underwater somehow. That would require making a much more complex rig but might be something I try in the future.

The least of my worries was having my camera go underwater. The aquarium was so buoyant that it was actually a little difficult to keep submerged to the top of the lens. I had the writer that was with me apply a decent bit of pressure to keep it down.

I will consider this first attempt at an underwater portrait a success but I can’t wait to try again and put some new ideas to the test.

So that was one situation this week where I tried something a little different. The other is a little more practical.

The paper is doing a story on the St. Anne Catholic Church. A few years ago, an arsonist burned the church down. It has taken three years to rebuild. I was granted a sneak peak and I wanted to show everyone what the inside looked like.

It would have been easy enough to go up on the balcony and take a wide angle photo and squeeze as much in to the photograph as I could. 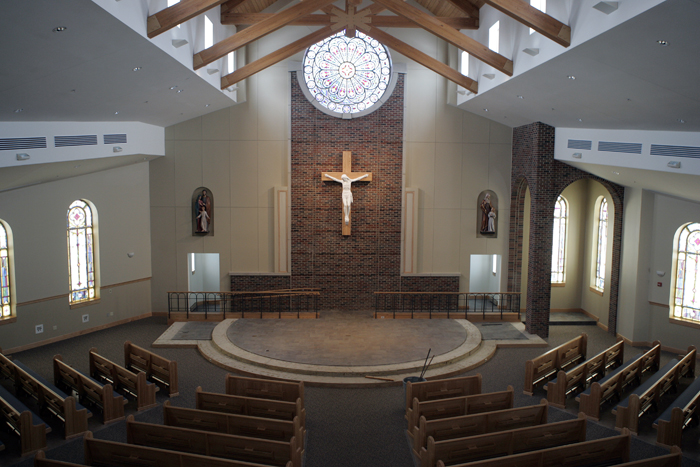 A view of the new St. Anne Catholic Church from the balcony. (C-T photo Max Gersh) ©2010

Even in this image shot at 24mm, there is so much of the church that is unseen.

I went out to my car and got my tripod. From the back row of pews, I started panning and tilting, taking incremental photos – 24 total.

I took those 24 separate photos and stitched them into a panorama that covered more than 180 degrees laterally.

This photo will be running six columns across the page on today’s paper.

In an effort to maintain journalistic credibility, I do list this image as a photo illustration. Since this isn’t a capture of one moment in time, it has to be that way. Otherwise I risk compromising my ethics by misrepresenting a scene.

Part of my job as a photojournalist is to show you something you might not ordinarily see. That might be changing angles or getting somewhere you can’t. I think both of these images do that.

Let’s hope I don’t run out of fresh ideas. Any suggestions for what to try next?