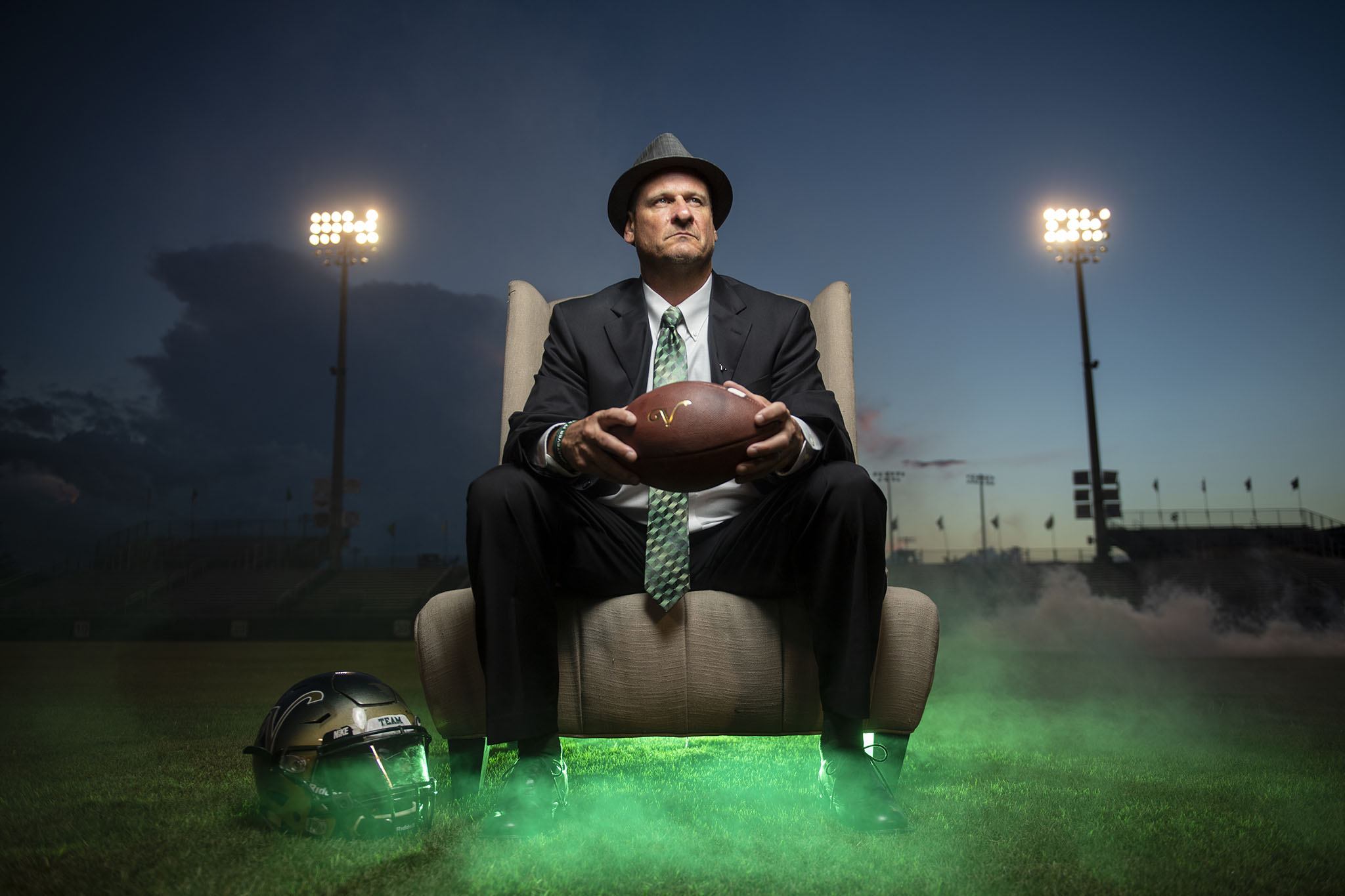 It’s that time of year again. Although it may not feel like it in Florida, football season is upon us.

Just like every year in Rockford, I was once again tapped to produce over the top portraits of our local high school football team. I was fortunate enough to get the help of my colleague, Michael Johnson, on this project.

I guess it wasn’t really luck. I insisted on it. You see, during a planning meeting that I was not part of, Michael pitched the theme for the project. He came up with the concept to theme the shoot around “Oceans 11.” You have the master mind. The safe cracker. The getaway driver. Etc. You get the point. We realized that there might be a problem with a strict “Oceans 11” theme as we didn’t really want to directly portray high school kids robbing a casino. So with a slight shift of approach, we switched it to a generic action movie team being assembled.

Michael was super hungry to learn what it took to take these portraits to the next level.  I knew that with his eagerness to learn, we were going to knock this project out of the park.

Like any big project, it started with a lot of planning. Michael and I met several times to go over what the shots would be. We needed to develop complete ideas, locations, wardrobes, and also figure out what props we may need. As we came up with ideas for the different positions, I sketched them out on half sheets of paper with enough room to take notes and sketch any changes. 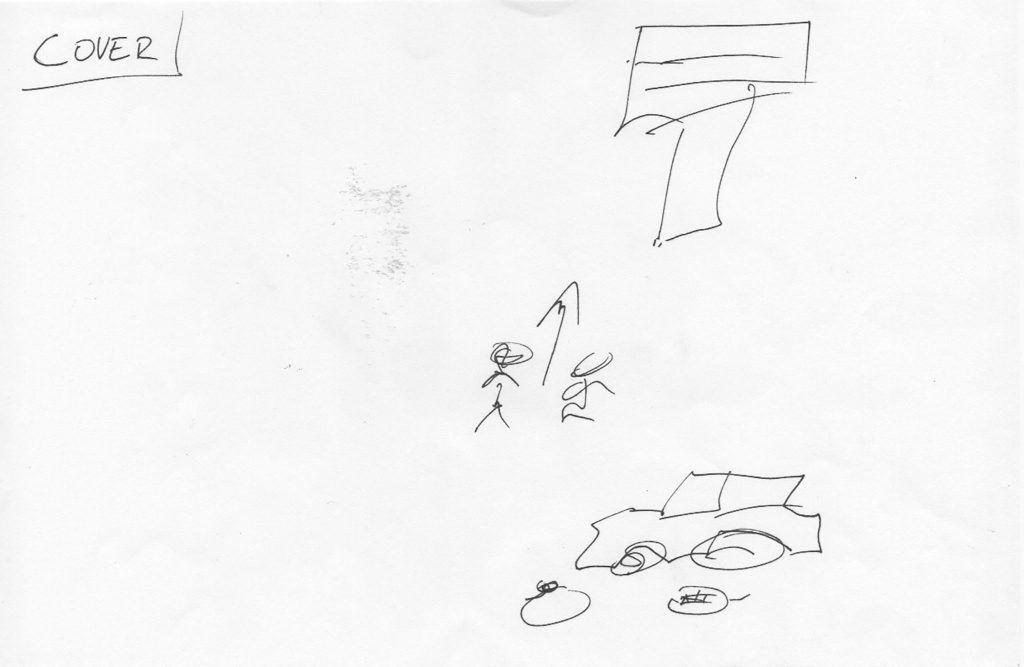 2) The coach. He’s the big boss. Get him on the football field in a big wing back chair with the stadium lights in the background. 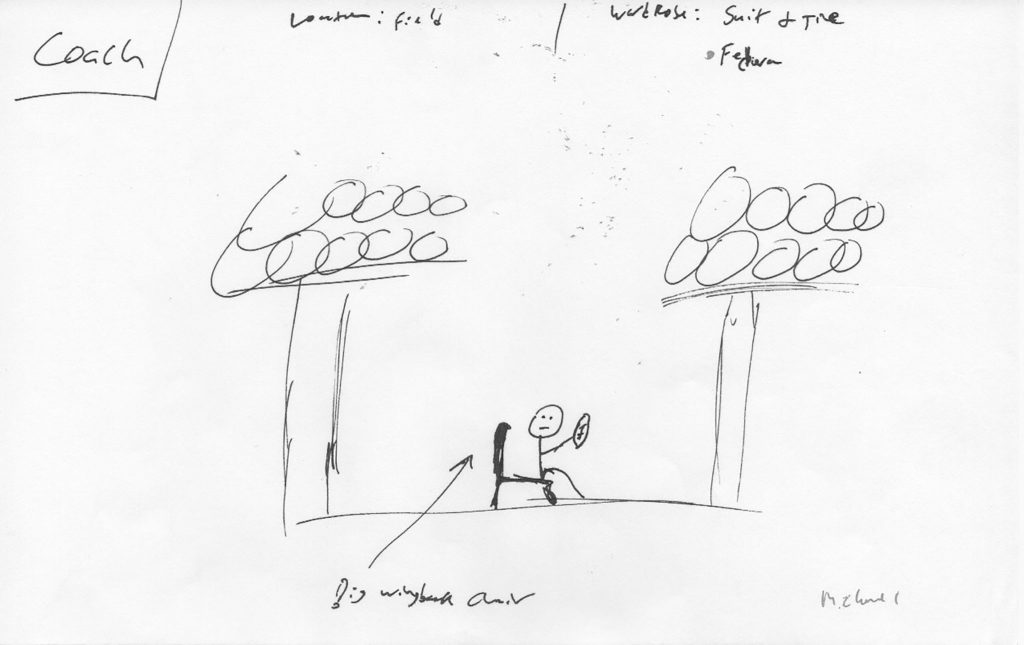 3) The quarterback. He’s our tech guy. He needed to look a little nerdy. We wanted to shoot it in a server room. He was going to be drawing a play on plexi glass that is lit by black light. 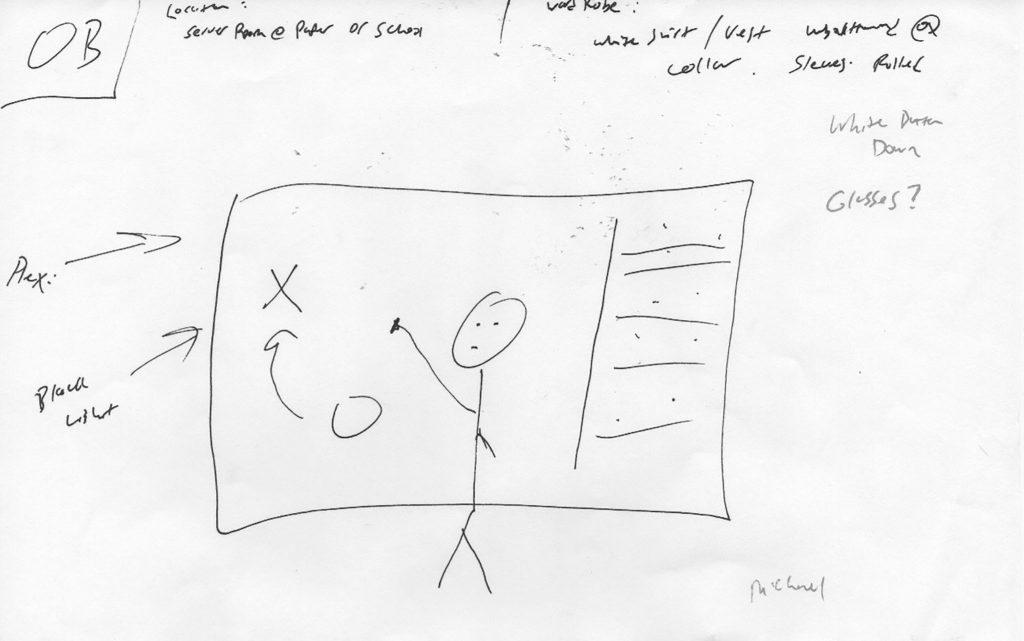 4) The running back. He’s the wheels of the operation. The idea was to shoot him in a muscle car in motion. Maybe have the car trailered so we didn’t actually need a teenager driving a classic car. 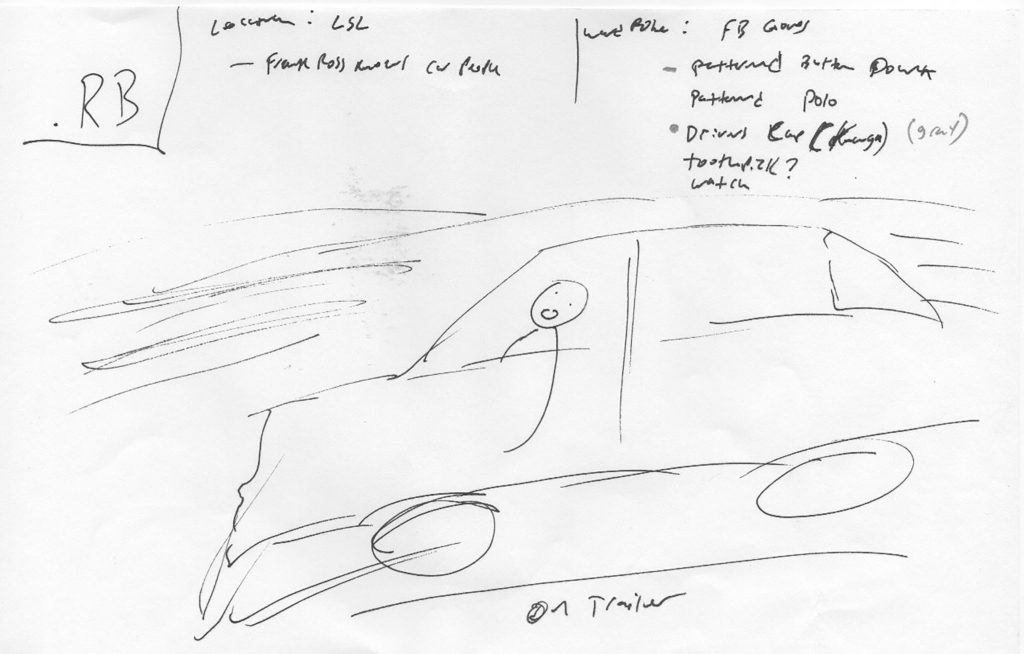 5) The line. These guys are the muscle. We wanted them coming down an alley with duffle bags full of gear. 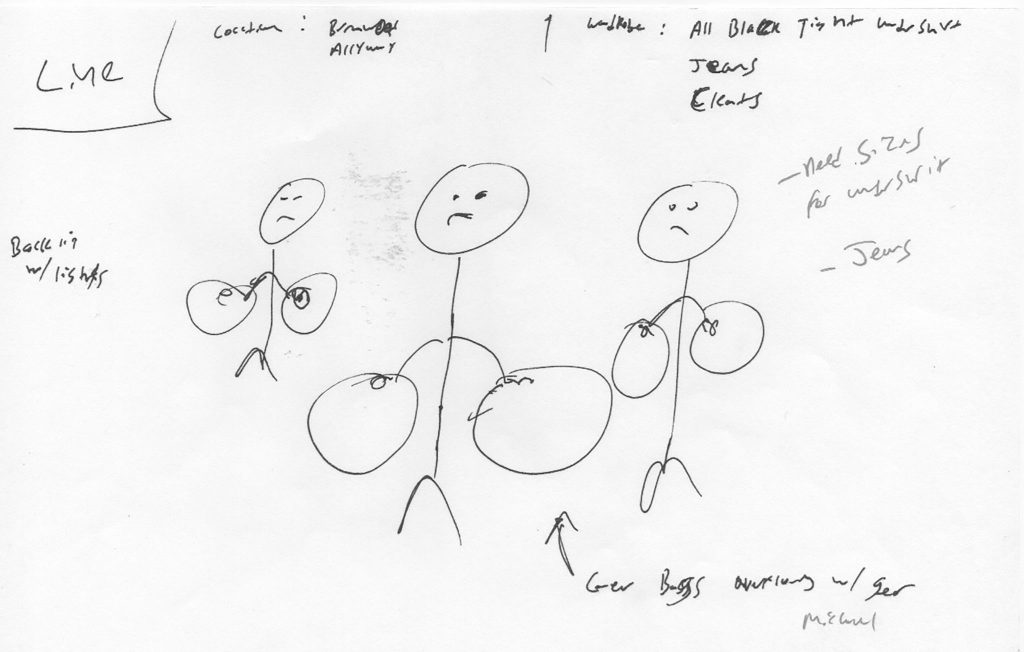 6) The wide receiver. He’s got the light touch. Light enough to work a delicate safe. 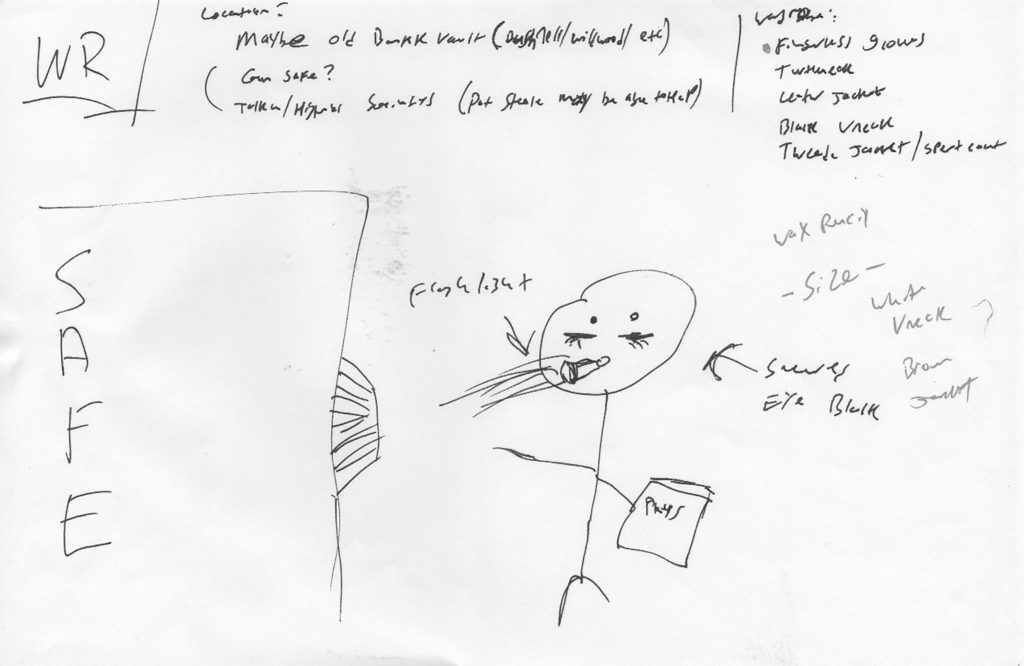 7) The defensive back. He can get anywhere and through anything. Including a laser grid. 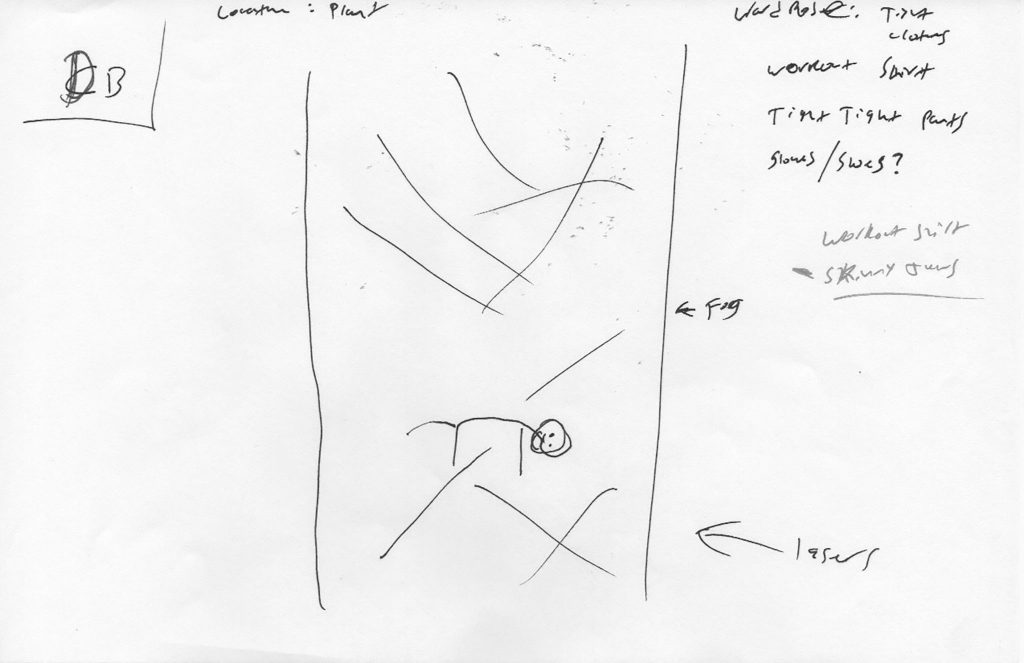 8) The line backer. He’s the demolitions expert and can blow up any play you throw at him. 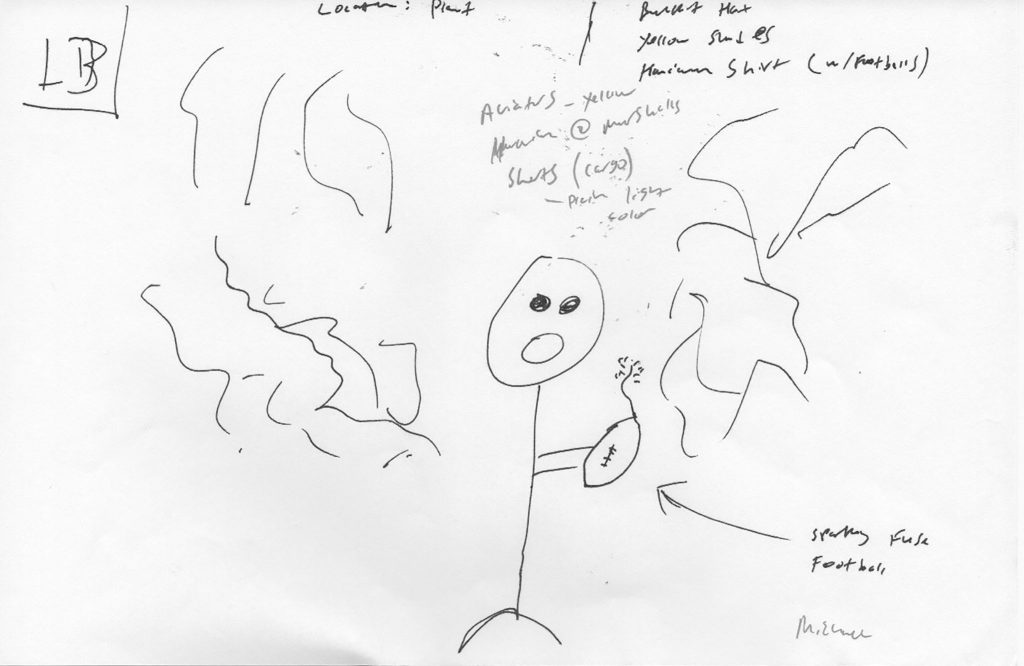 So now that you’ve seen my beautiful artwork, I hope you can appreciate that I am a photographer.

As planning continued, we figuring out wardrobe and locations. As those were determined, they were jotted down on the individual sheets.

I let Michael take his pick of images as the whole project was his idea. We tried to split who shot what, but we were both heavily involved in setting up every single image. The photo credit just goes to who happened to push the button. But none of these could have been executed individually. At least not on our time frame.

The first image we shot was the quarterback. We got access to part of the newspaper’s server room. I cannot express how small of a room this was to work in. Especially once I brought in a 6 foot by 3 foot sheet of 1/4 inch plexi. Using super clamps tripods and light stands, we were able to get the glass to float where we wanted it even though it barely fit in the room

Under the glass, we used a 9-LED blacklight bar to light up the neon wet erase markers that we were going to use on the plexi. We lit the player from above using a speedlight in a Westcott Rapid Box. Behind we used a MagMod on another speedlight with a green gel. The green gel is something we carried across all the images. 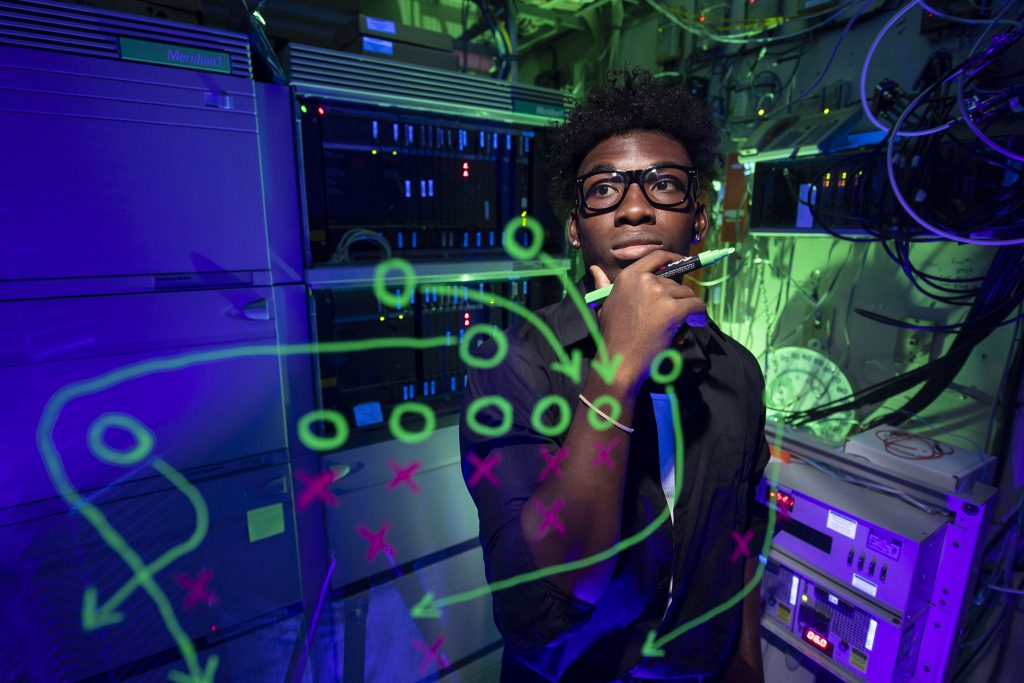 The next shoot was our safe cracker. We tracked down a restaurant that was in a historic building that just happened to be a bank in a past life. They were gracious enough to let us come in before they opened to shoot next to the old safe.

While I was outside the safe shooting, Michael was inside spraying our canned fog for the backlight to hit. We used a third light with a snoot on this shoot to get a little more separation. 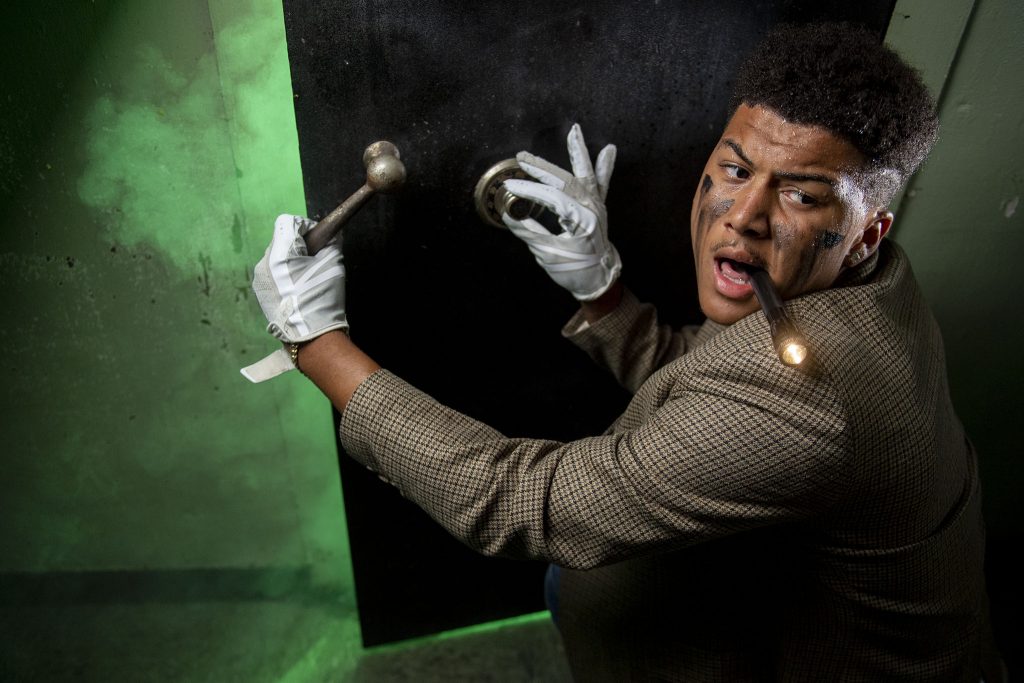 Next was our Hunter S. Thompson inspired demolitions expert. We wanted to shoot somewhere that looked like important equipment was at risk. We shot between the presses at our printing plant. It was really difficult to communicate as the presses were running during the shoot. We relied heavily on gestures back and forth.

When we started popping off frames and the flashes were firing, the press workers though the machines were sparking so we made sure to give them warning before we started spraying canned fog! 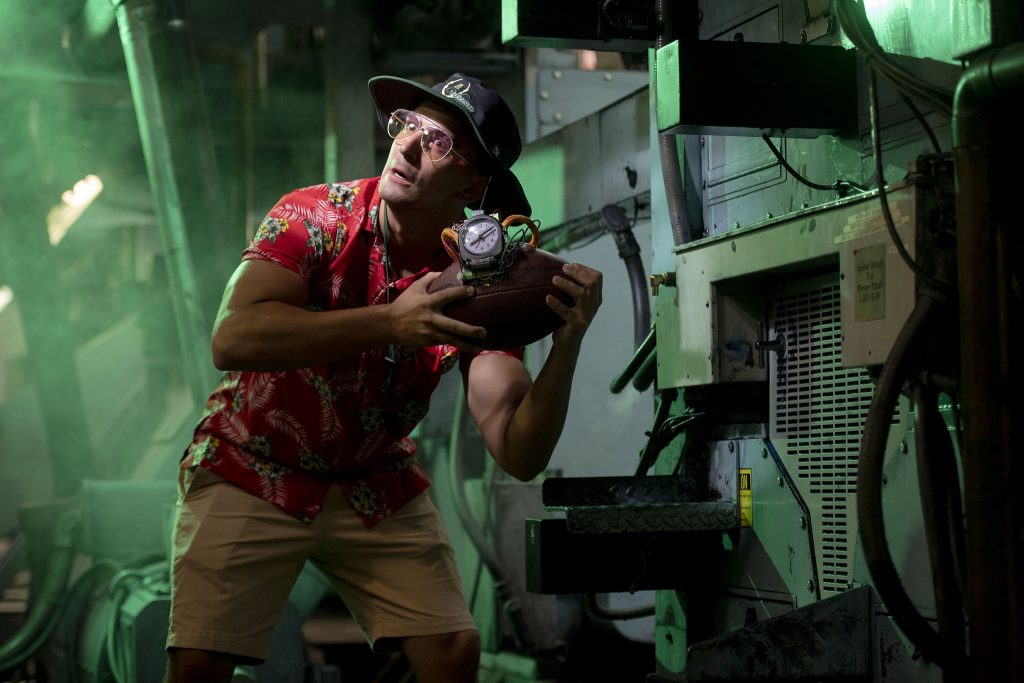 We then has the shoot with our linemen. This one turned out to be pretty difficult to light in this alley. The light rain didn’t help matters. The wind was also blowing our fog away too quickly. We later found a better means for making portable fog. 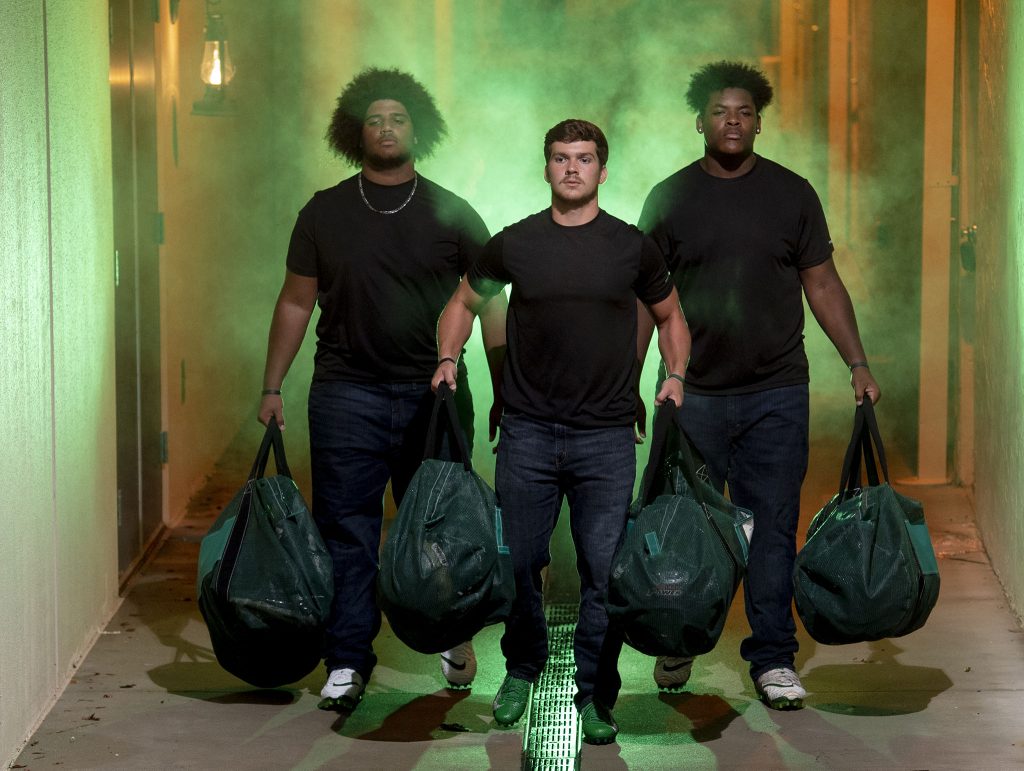 The next shot was one of the harder ones to execute. Remember that shot of the muscle car in motion? Turns out the kid we were using for that photograph had a muscle car for his daily driver. That meant no need for a trailer! But it meant that I had to hang out the back of my car with lights clamped on my roof rack and try to match speeds in a parking lot. We learned that it’s really hard to match speeds when you’re going slow. 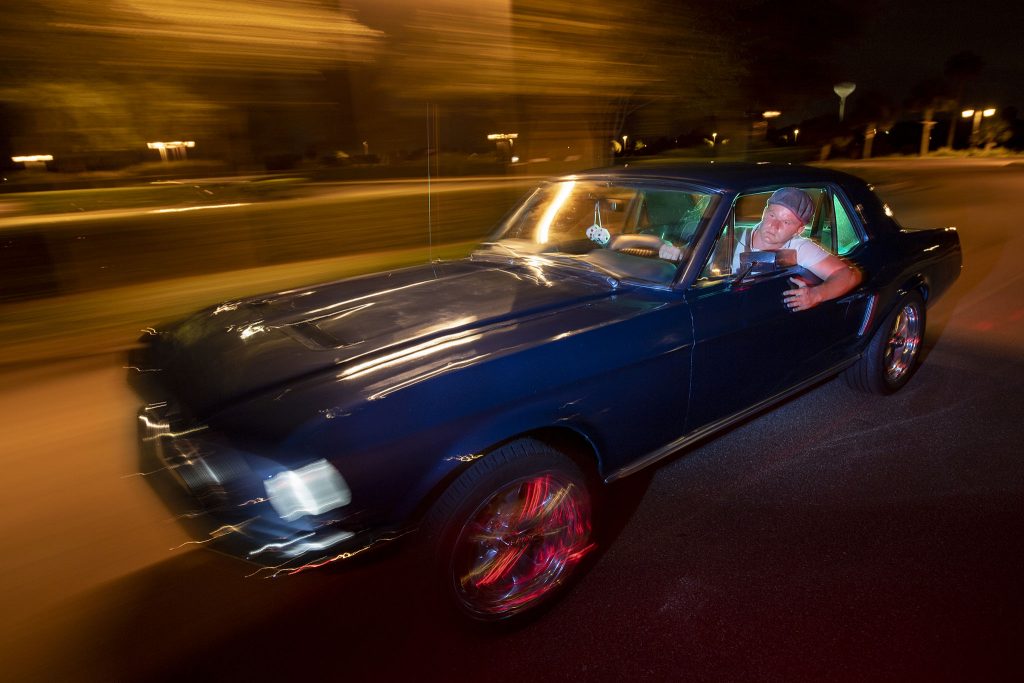 This next one may have been our most ambitious. Our press workers set us up a dark curtain to form a corridor that was about 25 feet deep and four feet wide. We used lasers and mirrors to make it look like the player was weaving through a laser grid. However, any little movement caused the lasers to get out of alignment. We also had to use the canned fog so the lasers would appear. I used a long exposure to build up a little more of the red tones. This frame may look simple but I assure you it took many hours of setup. 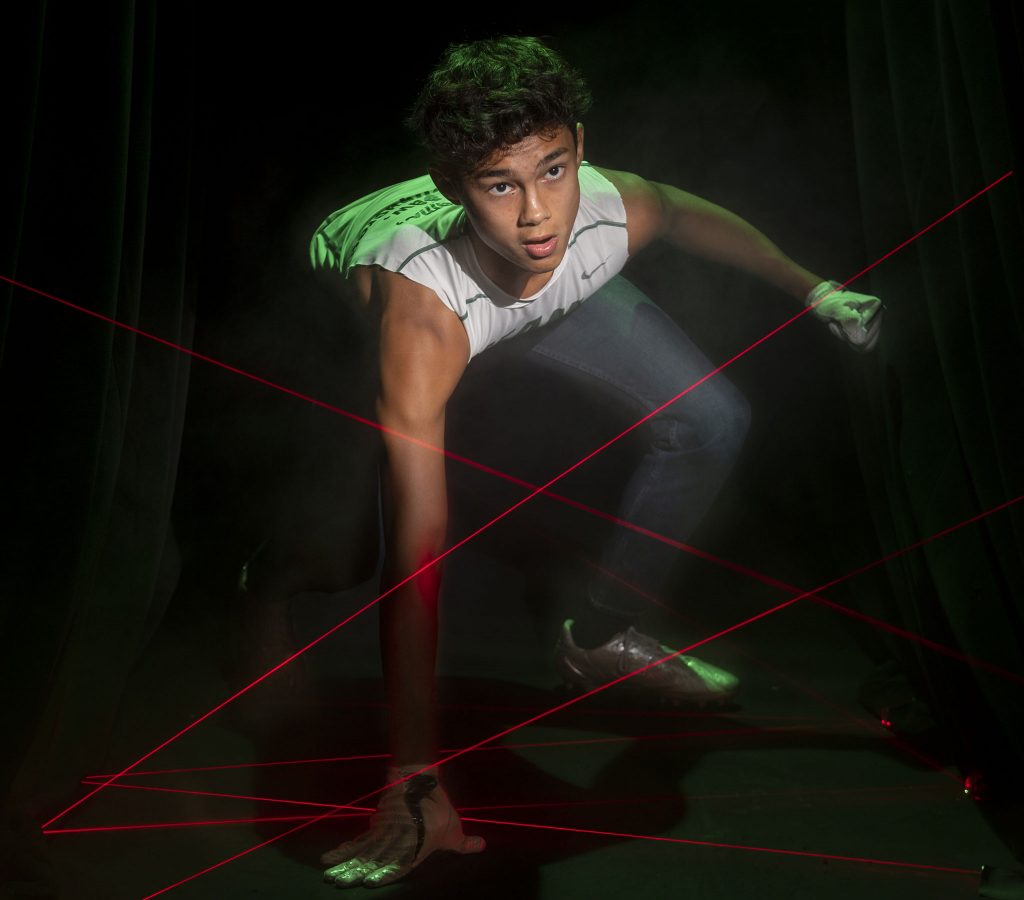 When it came to shooting the coach, we timed it to get him on the field at dusk. This time we had upgraded our fog game. We were using a propane powered insect fogger burning off food grade mineral oil. This gave us much larger plumes of fog in a much more controlled way. 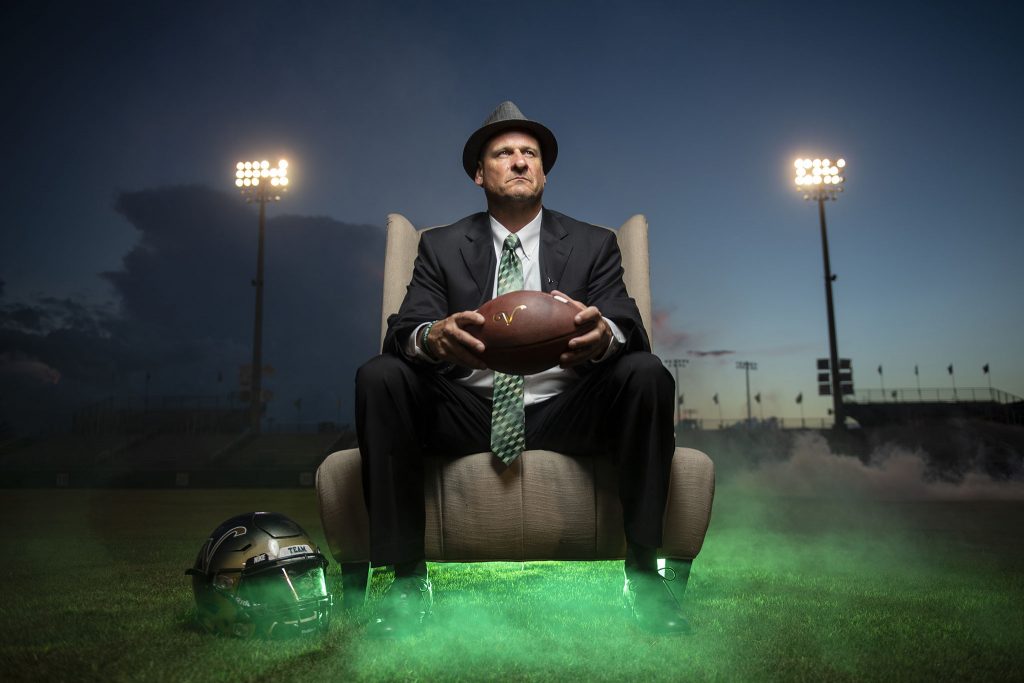 That same night, we were going to shoot the cover. We weren’t able to bring the car on the field so we went into the stands and just tried to use the lines to make something graphic. 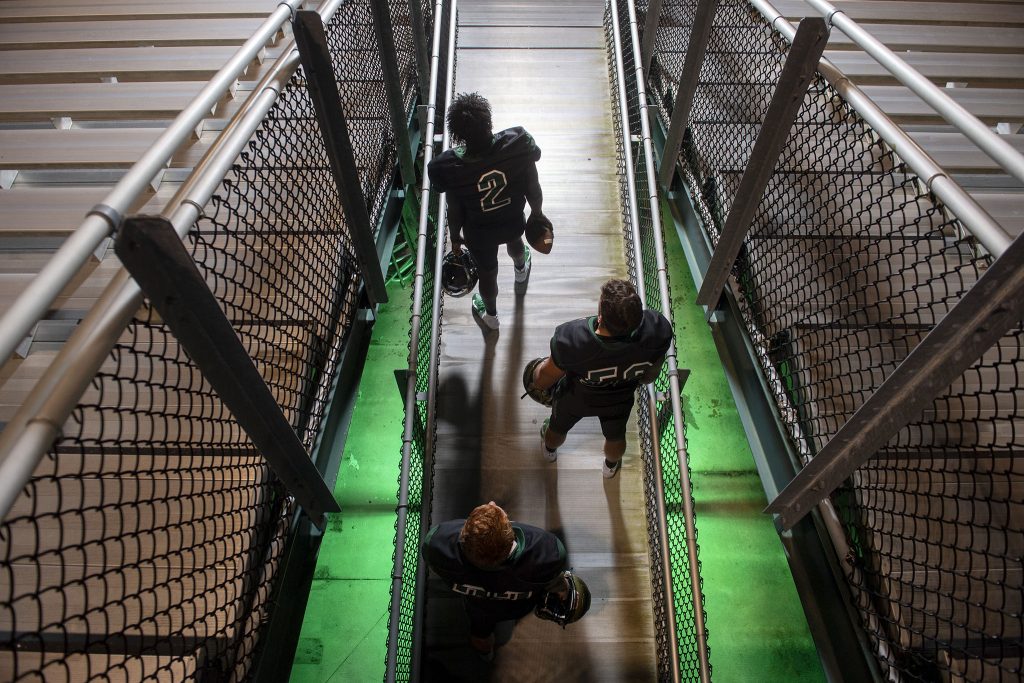 We had accidentally left out one player from our planning so we still had one shoot left. We came up with the master of disguise. The guy that sneaks in to a banquet, knocks out a waiter, steals his outfit and blends in to the crowd. Another local restaurant was super accommodating and let us use their swinging kitchen doors before they opened. 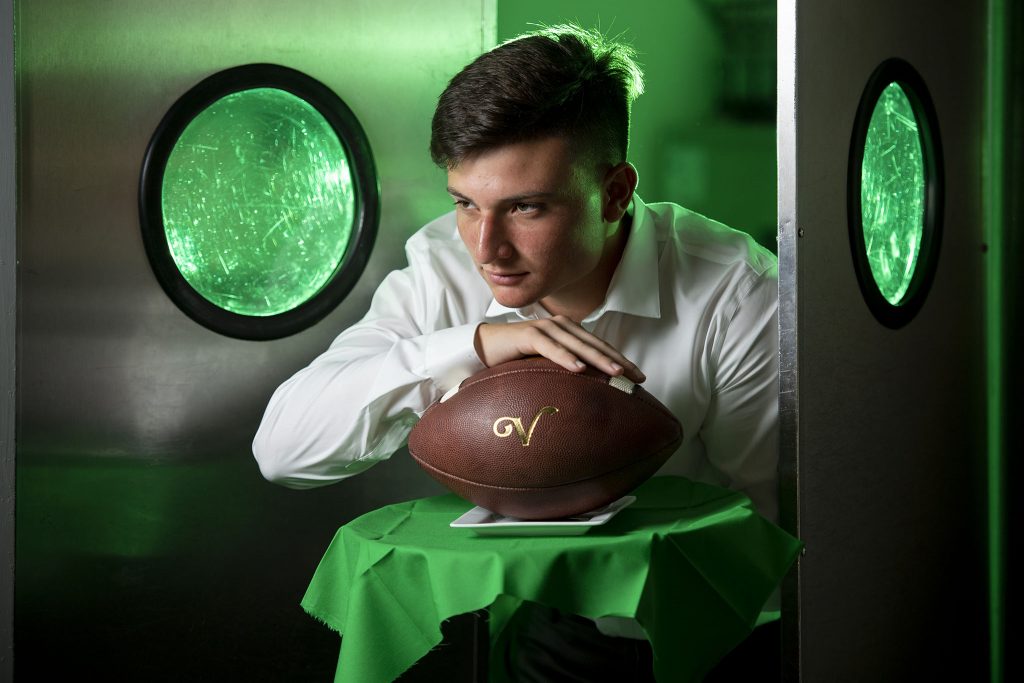 We were pretty happy with how this turned out. But there’s no time to rest. Basketball season is right around the corner!