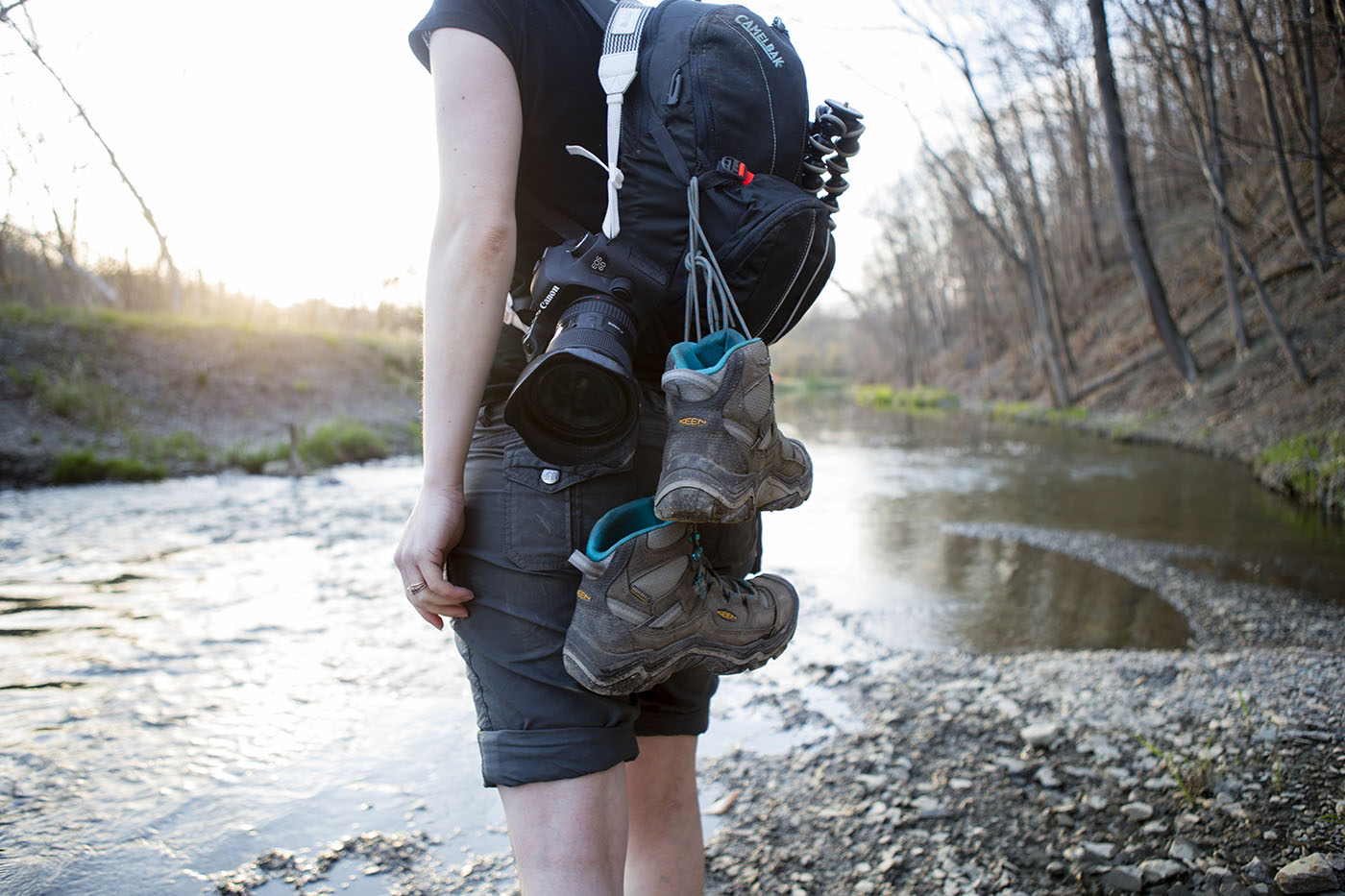 I don’t get to vacation often. When I do, I tend to prioritize doing and minimize resting. You know, making the most of it.

In mid April, my wife and loaded up the Subaru and headed east. All the way east. Well, New Jersey. About 14 hours of driving through the night. (Side note: We were kept awake the whole way by listening to Rainn Wilson’s strange life story in his book, “The Bassoon King.”)

Why New Jersey? We were visiting my grandpa for his 90th birthday.

So the car was loaded with the necessities we’d need for the celebration in Upper Montclair. However, if you saw the back of my Forester, you’d think we were loaded up for an expedition into the wilderness.

And you’d be right. Sort of.

Conveniently half way between Rockford, Ill. and Montclair, NJ, lies the Cuyahoga Valley National Park. Full disclosure: I didn’t know this park existed until I was browsing my route on Google Maps.

Smack dab in the middle of a 14 hour drive is a national park. It needed exploring.

So when we packed the car, we loaded up for our time in NJ, but maybe more so for our adventures in Ohio.

When planning our trip, the first thing I did was look at the option of camping in the park. The park has five camp sites. Not five camp grounds. But five sites. That’s it. You have to make reservations in advance. Just my luck, they didn’t start taking reservations until early May. And the first available date for camping was late May. As we were traveling in mid April, that wasn’t an option.

The next closest campground we could find was in Stow, Ohio at Silver Springs Park. So we did our best to get there while there was still daylight. We bought a new tent and wanted to make sure we had enough time to set it up properly. Light helps with that!

Next step: Fire and food.

It’s normally a good idea to plan your hikes out in advance. We like to play it by ear. So, after the sun set, we sat down with a map. We picked trails and tried to set an itinerary. That itinerary had us waking up before the crack of dawn so we could be at an overlook point at sunrise.

The next morning, we got on the Ledges Trail pre-dawn. The light slowly started to creep over the trees.

While I was exploring the park, I was also exploring my new phone, the Google Nexus 6P. I found a setting that said Photosphere. So, I made one. Click and drag to explore the image below.

After healthy exploration of the Ledges Trail, we headed to a southern section of the Ohio & Erie Canal Towpath Trail to see the Beaver Marsh. It was a short walk on flat ground but it was a cool change of scenery.

We left the park for a little bit to get lunch with a friend. If you enjoy burritos, Taco Tontos in Kent is a solid lunch choice.

Our friend took us to the Kent Bog (not sure if that’s the formal name of the site).

Our burritos left us with enough energy to push through for one final (and longer) hike for the day. We headed out on the Standford Trail and Brandywine Gorge Trail to see Brandywine Falls.

This trail had a little bit more elevation. The climbs tended to be reasonably short but rather steep. We easily made it to the falls and they were awesome.

As we left the falls to complete the full loop hike back to where we started, we saw a sign that said something along the lines of “Bridge out ahead. Dangerous crossing. Cross at your own risk.” So naturally, we proceeded on.

It took a little work to figure out the best way to cross the stream, but with the help of large rocks, downed trees and mountain goat precision, we crossed and remained dry. Then we made short work of getting back to the car as the sun was setting. It had been a long day.

The next morning, we took it easy. We didn’t get back out on the trails till midday.

When we got back to the park, we stopped in at one of the visitor’s centers. I asked the two park rangers if they had any suggestions for adventures. The first suggestion was taking the trail to Blue Hen Falls, then going beyond it to see Buttermilk Falls.

We were told to go to Blue Hen Falls. There will be a sign that says the trail ends. Go around that sign and follow the beaten path of others to get to Buttermilk Falls.

We started out with the hike to Blue Hen Falls.

We went around the “trail ends” sign and kept walking. We crossed back and forth over the stream, balancing on rocks and downed trees. A group of teens lacking proper footwear tried to follow us but they had too much difficulty on the terrain.

Eventually, we ended up smack dab on top of Buttermilk Falls.

We hiked around to get down to the bottom of the falls.

As we hiked back, we noticed that the trail split in several places, but they all appeared to end up back at the same place.

So back to those park rangers for a minute. They suggested another challenging and somewhat hidden trail. They even joked that we might not make it out of this one. It was a hike to see Twin Sister Falls.

This was the second time we heard about it that day. While we were relaxing in the park in the morning, we struck up a conversation with a local (check out his Instagram for lots of photos from the park). He gave us directions to these falls as well. He also warned us that we’d get wet. He was right.

The first leg of the hike is easy enough. It’s along the Ohio & Erie Canal Towpath Trail, north from the Brecksville Station. The river is on your left. The canal is on your right. After maybe a half mile, you see what the park calls a “mud catcher” on the right. It looks like a concrete wall that has a eight-foot waterfall rolling over it.

The mud catcher is the trail head to Twin Sister Falls. We took off our boots and waded through the canal.

The rest of the trail isn’t a trail at all. It’s walking upstream. In the stream. Climbing over and under downed trees. Walking in shallow water. Delicately stepping on slick rocks and mud. But after a while, bam. You’re there. Two waterfalls raining down in a large opening. (Note: I probably wouldn’t recommend doing this hike after heavy rains).

We were so focused on getting to the falls that we didn’t stop for pictures on the way in. But we certainly did on the way out. The sun was setting and everything was backlit and it was gorgeous.

The canal seemed a little higher and colder on the way out, but it was so worth it.

And yes, I did bring a DSLR with me. And I used it quite a bit. But it was a fun exercise to document the trip on my phone.

See more photos from the trip on my Instagram page.