Cameras in the courtroom

I like to do my best to prepare for each assignment. Usually, I have a general idea of what is going to be happening, where I’m going to be and what kind of equipment I’ll need. However, that’s not always the case.

Recently, Illinois has started allowing access to news cameras in courtrooms. At a maximum, two television and two still cameras are allowed in at a time. They are allowed in on a case by case basis requiring the judge’s approval.

There are many rules that photographers in the courtroom must follow. We must stay stationary throughout the hearing or trial. Also, we must be as unobtrusive as possible, silencing our cameras as much as possible. No photos can be taken of jurors or other confidential individuals.

Media in Winnebago County, Ill., had our first opportunity to shoot in the courtroom in early July. It was a hearing for Tina Lamonica who is being charged with first-degree murder. I was chosen from our staff at the Rockford Register Star to be the still cameraman in the room.

Not knowing what to expect, I packed lenses from 16mm up to 300mm. However, I ended up being right up front alongside the judge’s bench. The only problem was that the attorneys and Lamonica were standing at podiums right in line with my view. I could see the profile of the person on the end and that was it.

Knowing that this was a hearing, I knew it wasn’t going to last long. Realizing that I didn’t have a clear shot of Lamonica, I switched to my 24-70, hoping to get a decent frame showing the room. Then all of the sudden, Lamonica went to the ground. I twisted my zoom ring and fired off frames as quickly as I could with my camera in quiet shutter mode.

With a heavy crop, I was able to pull a shot of Lamonica on the ground. 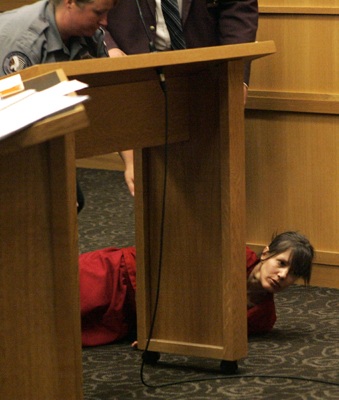 There was obviously no way to predict that was going to happen. I regretted having just taken off my 70-200. So when I had my next opportunity to be in the courts again for the sentencing of Rafael Santos, I better prepared myself.

With the Lamonica hearing, we knew it would be brief. Santos was being sentenced after being convicted for murdering a push-cart ice cream man, Isidro Duran. We knew we could be there for hours.

The judge wanted us set up in the courtroom an hour early. When we arrived, we found out that we’d be in the back of the courtroom this time. I was glad I had packed the 300mm and had my 1.4 teleconverter to get a little extra length. I had also brought a second camera (something I wish I had regularly) so I would have a variety of focal lengths handy at any moment.

The first opportunity we had to take pictures was when Santos was escorted in by a bailiff. This was also one of the only opportunities to see his face since we were in the back of the room. 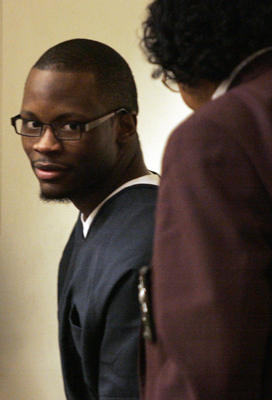 Family members then went on the stand to read impact statements. 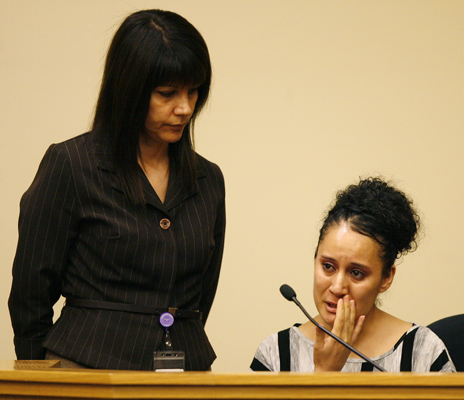 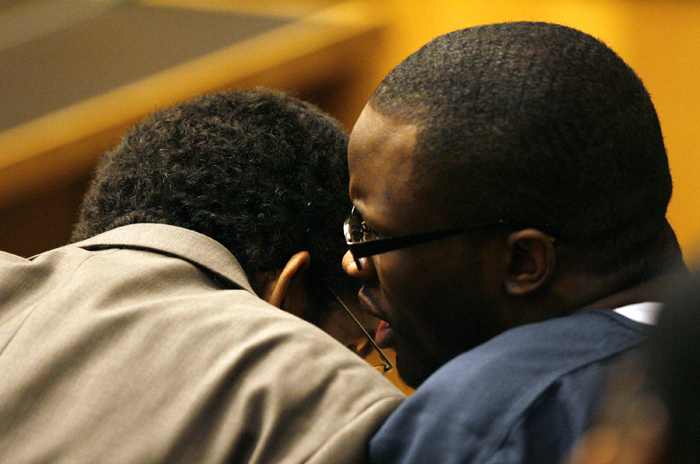 Rafael Santos (right) leans over to whisper to one of his attorneys, Wendell Coates, Wednesday, July 11, 2012, during his sentencing at the Winnebago County Criminal Justice Center in Rockford. MAX GERSH/ROCKFORD REGISTER STAR ©2012 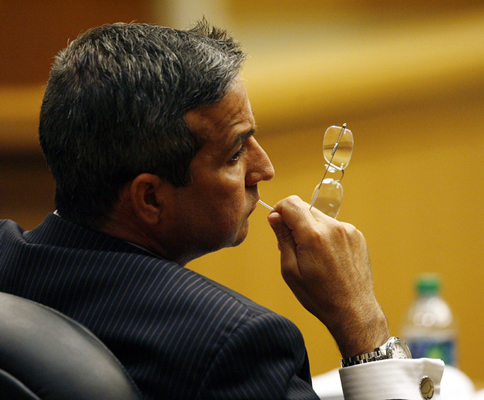 Santos’ attorney made an argument asking for a shorter sentence. 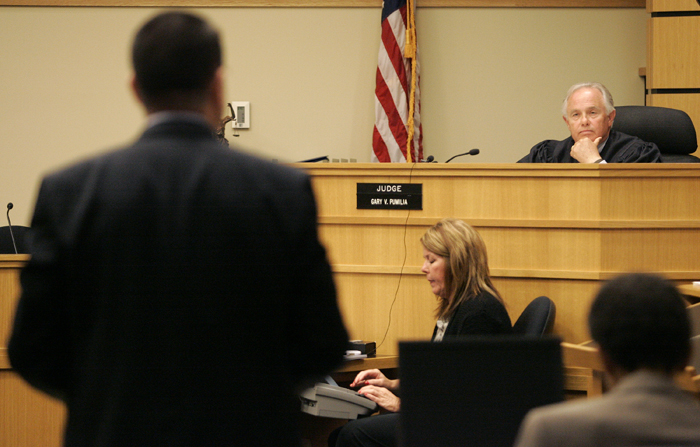 After the judge handed down a sentence of 70 years, the media had an opportunity to talk with Maria Busio, the wife of the late Isidro Duran. 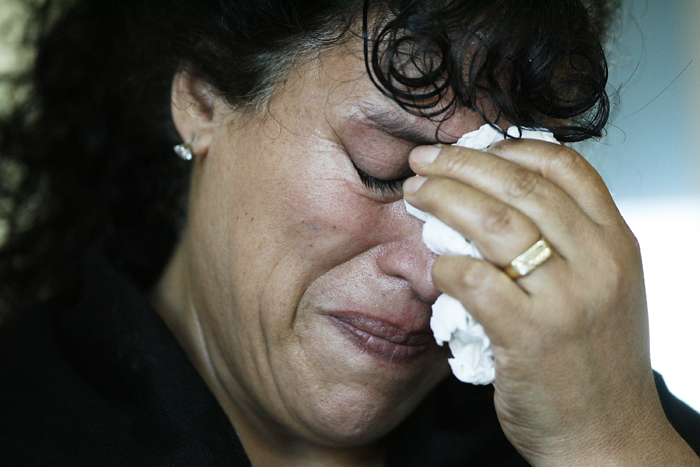 Maria Busio, wife of the late Isidro Duran, gets emotional while talking with the media Wednesday, July 11, 2012, after the sentencing of her husband’s murderer, Rafael Santos, at the Winnebago County Criminal Justice Center in Rockford. MAX GERSH/ROCKFORD REGISTER STAR ©2012

Looking back on these first two experiences, one thing I would probably do differently is to shoot in RAW. The light in these courtrooms isn’t ideal. It’s difficult to get an accurate white balance. Having the ability to adjust that in post would be an advantage.

It would also be nice to have even longer glass when shooting from the back of the courtroom. But until the paper forks over the cash for a 400mm, that won’t be an option.

While neither judge objected to the sound from my camera, I would still like it to be even quieter. A device like a Jacobson Sound Blimp would effectively silence the camera completely. However, like everything else in the photography industry, they don’t come cheap.

At the end of the day, I think having cameras in the courtroom aids in the news coverage of criminal trials. As the Register Star’s editorial put it, “This is a step toward making the courts more accessible to the general public. Anyone can attend a trial in person, but who has the time? The cameras allow the taxpayers who pay for the court system to see what’s going on.”