Relief may finally be on the way. It seems that we’re finally ever so slightly stepping out of the deep freeze pattern that has been pummeling us with bitter cold and steady snow all season.

Other than working in the challenging elements, photojournalists might struggle to find a fresh way to tell the same old story over and over again. It’s cold. It’s snowing.

Snowy owl photos aside, here are a handful of frames that show how I attempted to capture this winter season.

Everything seemed fine with the first light snowfall in November. 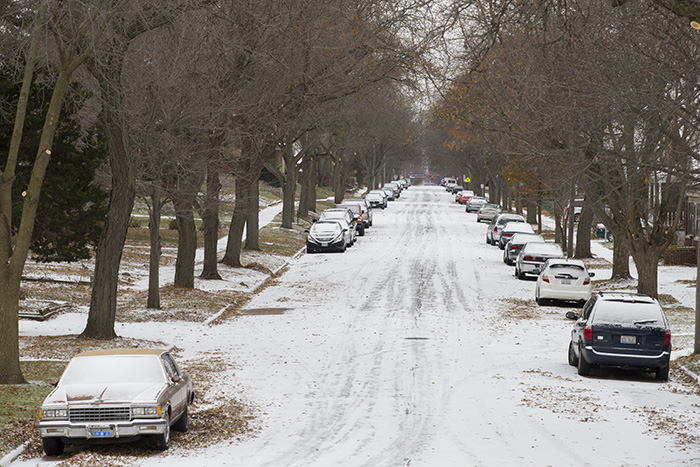 But extreme cold began to set in. The lakes froze which was good for the ice fishermen. 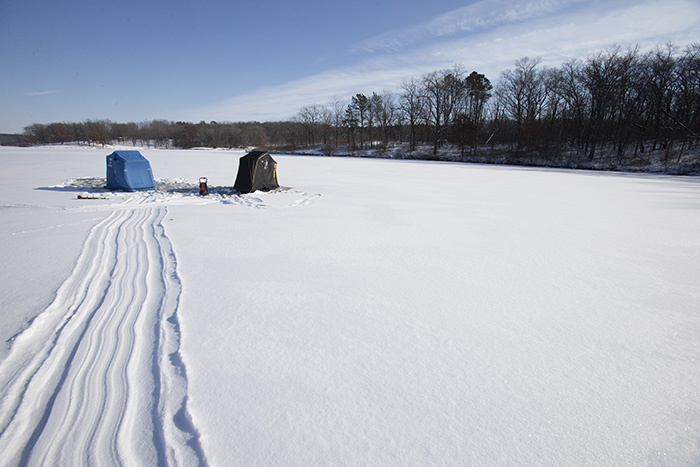 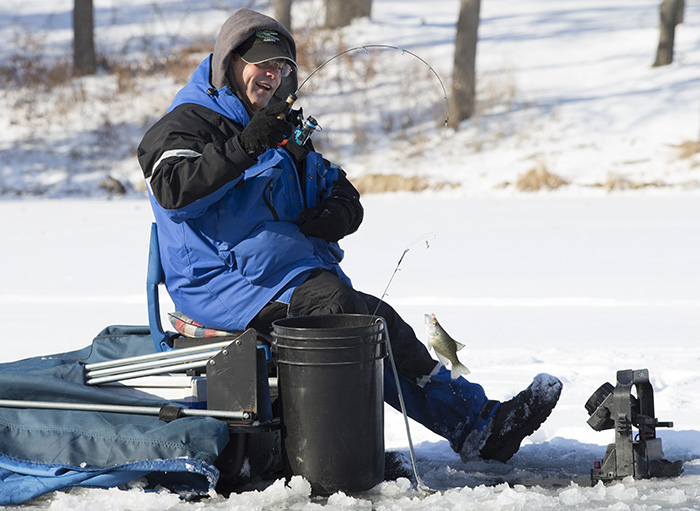 K.C. Schaible of Machesney Park reels in his tenth crappie of the day while fishing through the ice on Pierce Lake on Monday, Dec. 9, 2013, at Rock Cut State Park in Loves Park. Schaible said this was his first time fishing in the park this season and he tossed back his catch. MAX GERSH/RRSTAR.COM ©2013

Part of my job is to find people out in the elements when the weather gets bad. That meant walking out on the frozen lake (above) or waiting for a jogger to run into a snowy scene. 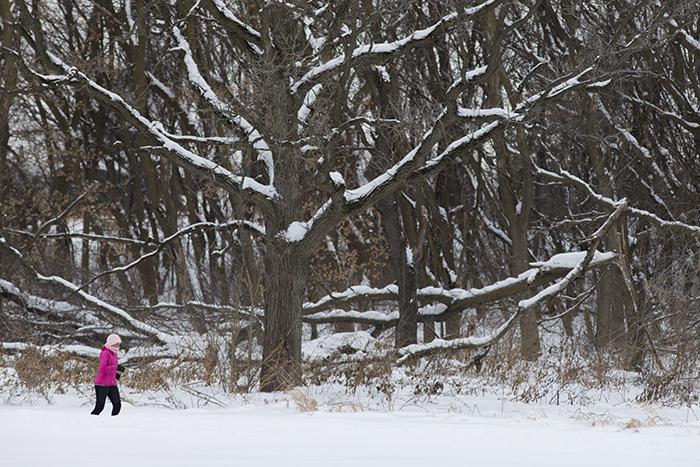 Regina Bielkus of Rockford runs on the Midway Village Museum Loop on Sunday, Jan. 5, 2014, in Rockford. Bielkus says she runs every day, no matter the weather but plans on taking Monday off. MAX GERSH/RRSTAR.COM ©2014 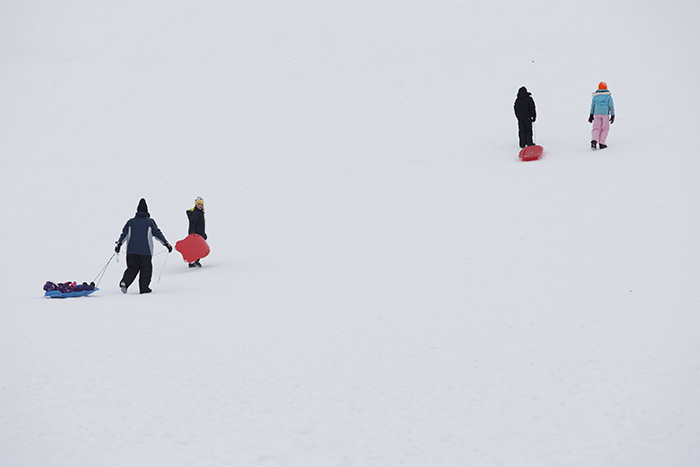 And that’s when the bottom dropped out. Cold like I’ve never experienced before. We had temperatures around 20 below zero and wind chills approaching 50 below. Nobody was outside. Well, nobody but me and the letter carriers with the USPS. 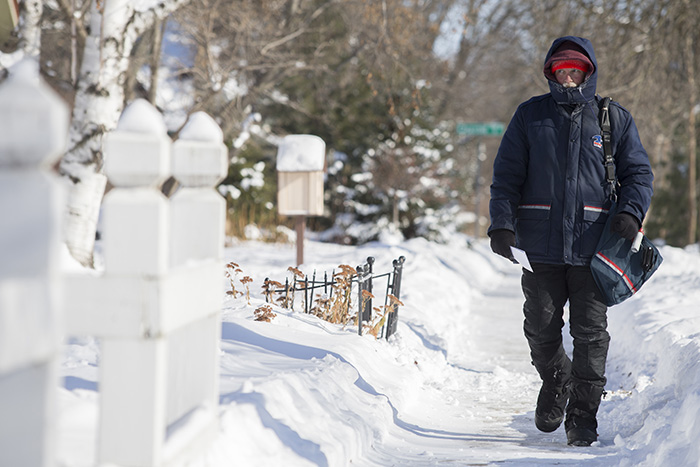 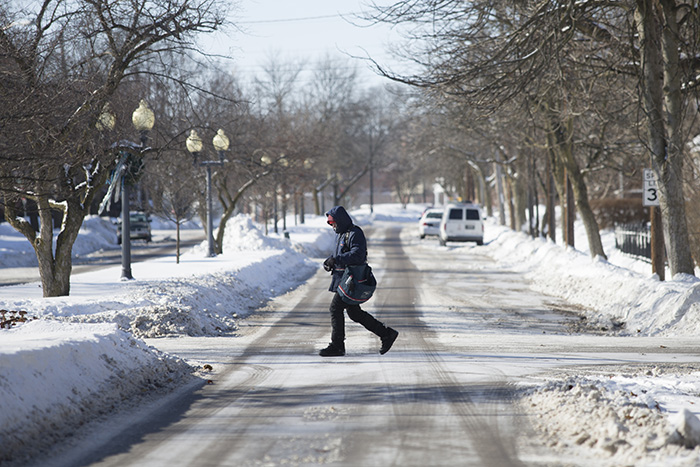 U.S. Postal Service letter carrier Doug Hanson crosses Harlem Boulevard at Guard Street on Monday, Jan. 6, 2014, while walking his route in Rockford. Hanson, a veteran letter carrier of 26 years, said this is one of the coldest days of work he could remember. MAX GERSH/RRSTAR.COM ©2014

Big toys were brought out to clear out the big snow. 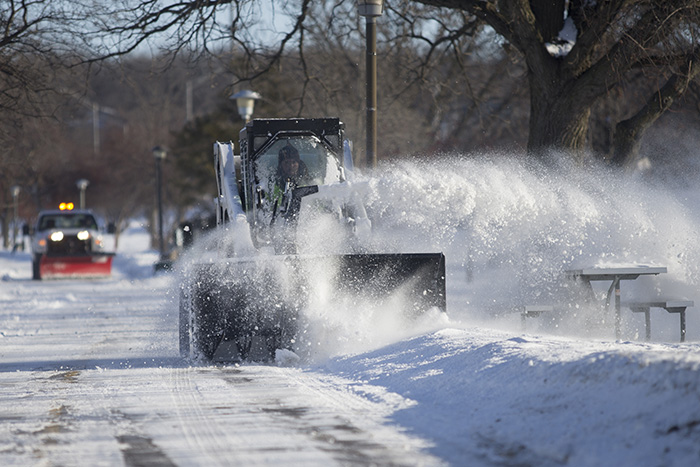 It was so cold, I saw an atmospheric phenomenon that I didn’t even know existed. 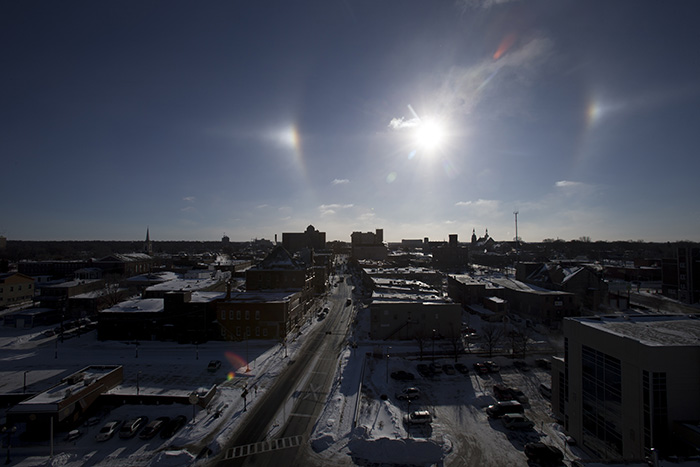 A sundog surrounds the sun as it rises Monday, Jan. 27, 2014, over downtown Rockford. Sundogs appear in very cold weather when light is refracted through ice crystals in the atmosphere. MAX GERSH/RRSTAR.COM ©2014

Motorists had all sorts of trouble remembering how to drive on the slick stuff. 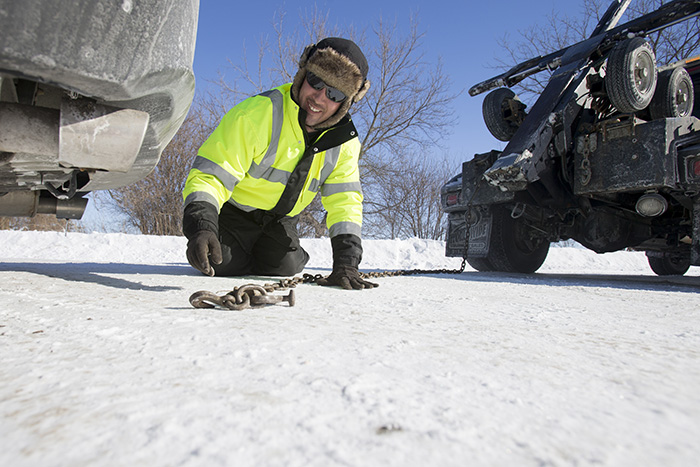 Coachman’s Towing driver Shaun Newman crawls to connect a tow chain to the underside of a sedan that got stuck in the snow Tuesday, Jan. 28, 2014, in Roscoe. MAX GERSH/RRSTAR.COM ©2014

The record-breaking cold and snowfall that many locales were having made it difficult for cities and municipalities to stay fully stocked with road salt. 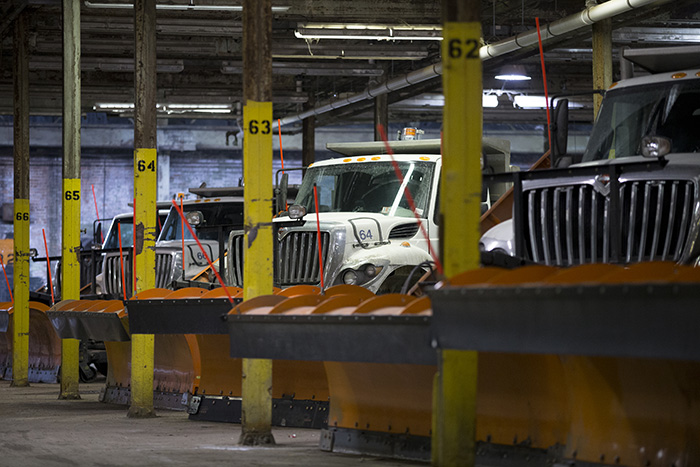 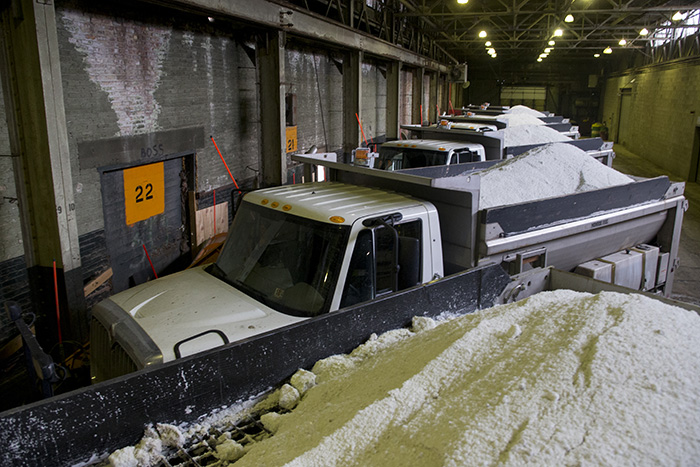 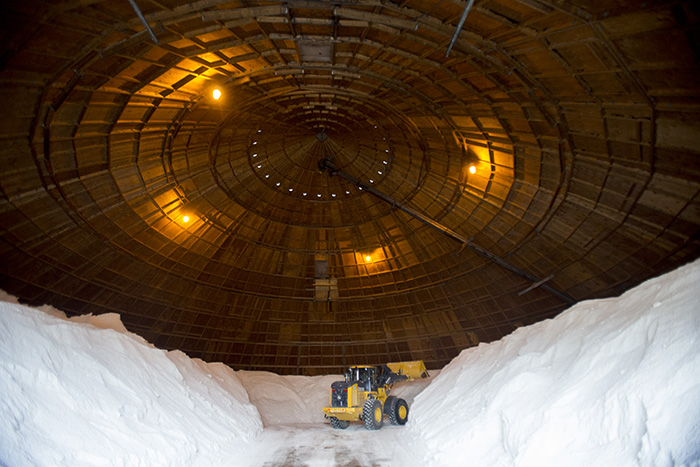 Equipment operator Tyler Pearson uses an end loader to move a shipment of salt to the edge of the salt dome Tuesday, Feb. 4, 2014, at the Rockford City Yards. The city has about 3,000 tons of salt right now and has used more than 15,000 tons this winter. MAX GERSH/RRSTAR.COM ©2014 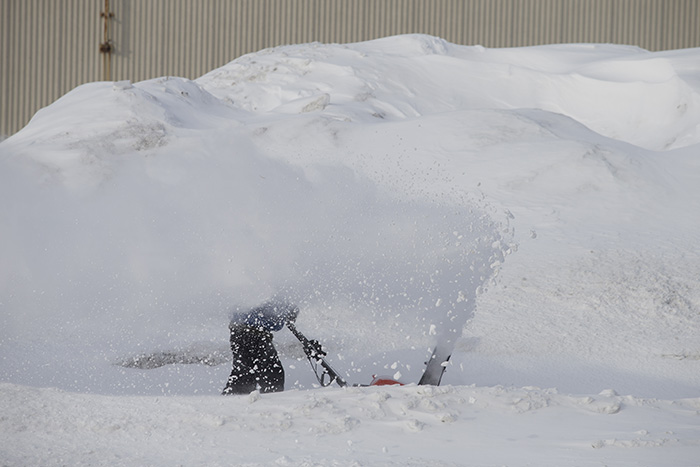 The super cold temperatures gave people enough confidence to walk down the middle of the frozen Rock River for miles. 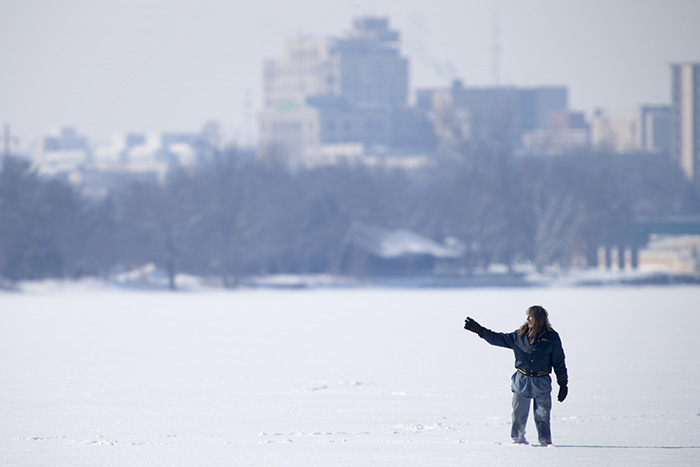 A man yells to police officers as he walks north in the middle of the frozen Rock River on Sunday, Feb. 9, 2014, south of the Auburn Road bridge in Rockford. MAX GERSH/RRSTAR.COM © 2014 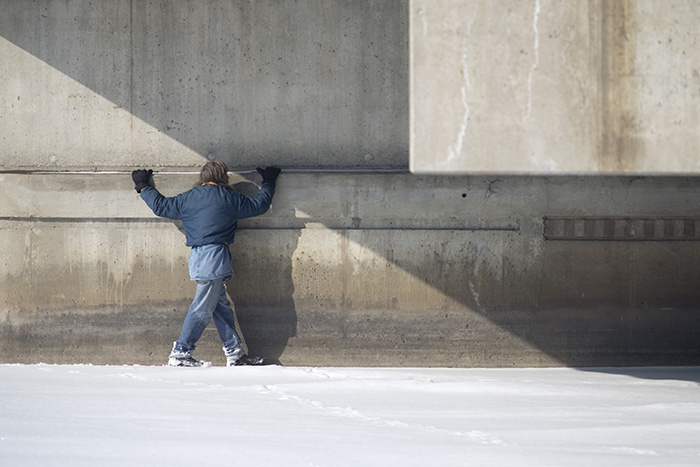 A man holds on to the supports of the Auburn Road bridge Sunday, Feb. 9, 2014, as he walks north on the frozen Rock River in Rockford. MAX GERSH/RRSTAR.COM ©2014 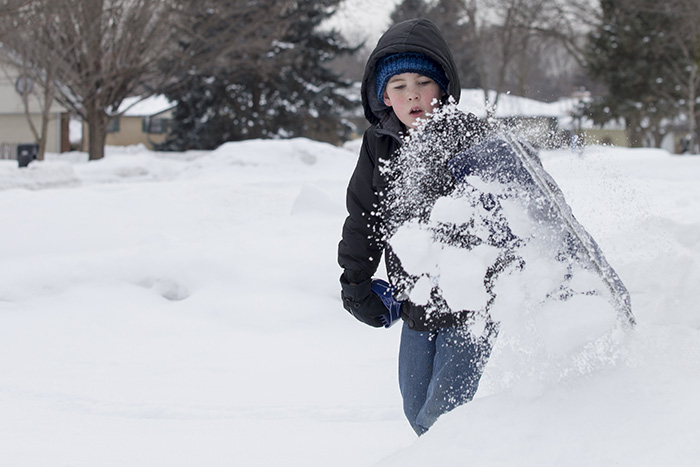 Cam Russo, 8, shovels a driveway in his neighborhood Wednesday, Feb. 12, 2014, in Rockford. Russo’s class was given shovels and gloves and are trying to collectively shovel 100 driveways by the end of Feb. This makes for Russo’s 11th. MAX GERSH/RRSTAR.COM ©2014

And more folks playing in the fluffy stuff. 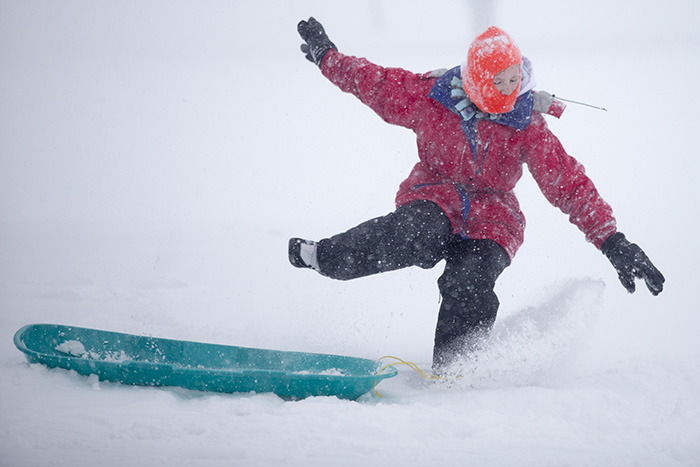 This time, the snow started falling so hard, I could hardly see. I thought my glasses were fogging up because my visibility was so poor. The trees disappeared. The parking lot disappeared. 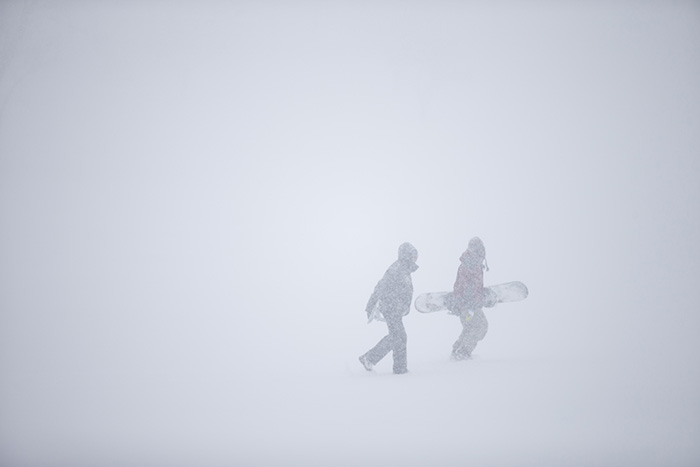 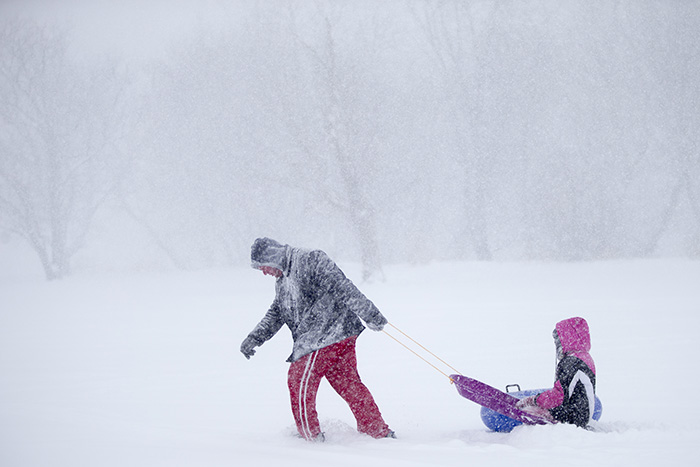 Tom Eisenrich of Rockford pulls his daughter, Grace, 8, back to the car through heavy snow after sledding Monday, Feb. 17, 2014, at Reuben Aldeen Park in Rockford. MAX GERSH/RRSTAR.COM ©2014

With temperatures finally clipping into the 40s this weekend, I’m eager that the roads will clear up and I’ll be able to get back out on my bike. Hopefully I’ll be able to dress a little lighter than late last year.

Getting dressed for tonight’s ride. pic.twitter.com/jM4PIYcrYB